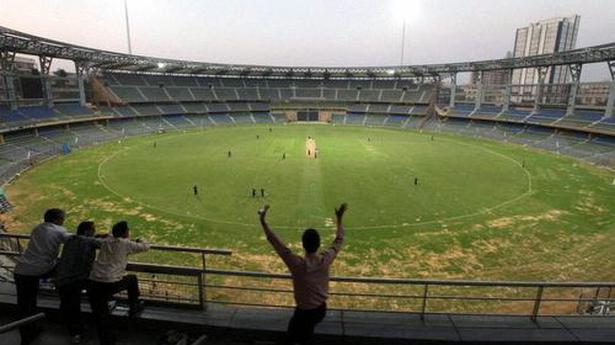 The State government has demanded ₹120 crore from Wankhede Stadium for the renewal of its lease, the Assembly was informed on Friday. The stadium is owned by the Mumbai Cricket Association (MCA). It also houses the headquarters of the Board of Control for Cricket in India.

Revenue Minister Chandrakant Patil, in a written reply, said the Mumbai city district collector sent a notice to the MCA about the dues on April 16. His reply came in response to a question how the government proposed to recover ₹120 crore from the stadium.

The earlier lease agreement expired on February 5, 2018, and the MCA had written to the Chief Minister seeking its renewal in 2017 itself, the reply said.

The stadium, located off the Arabian Sea, has hosted several memorable matches, including the 2011 ICC Cricket World Cup final in which India emerged victorious.

Has the decision to rest M.S. Dhoni for the last two one-dayers of the ongoing India-Australia series inadvertently ended the former captain’s international career at home? Indications are that Dhoni may retire from international cricket after the World Cup this summer. Dhoni is not the man to linger on. Moreover, he has no key reason […]

Indian cricketer Mahendra Singh Dhoni was awarded the honorary rank of a lieutenant colonel  with the Indian Territorial Army in 2011. In 2015, he became a qualified paratrooper after having completed five parachute training jumps from Indian Army aircrafts in the Agra training camp. Dhoni will join his battalion, the 106 Territorial Army Battalion (Para),  […]

Bangladesh Prime Minister Sheikh Hasina’s confirmation that she will attend the second India-Bangladesh Test at the Eden Gardens here on November 22 has reduced the uncertainty over the series, arising out of a strike called by the leading Bangladesh cricketers. Even as the strike put a question mark over the team’s tour of India next […]