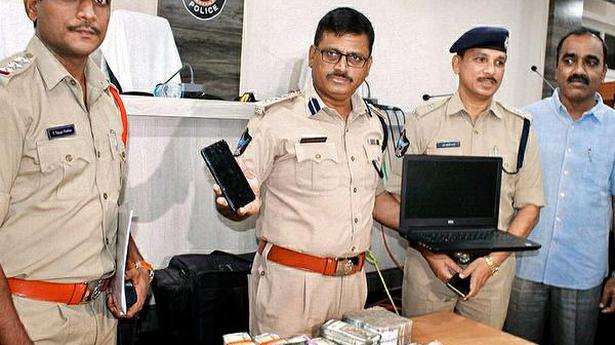 The Sattenapalli police in Guntur district have busted a major online cricket betting racket in which hundreds of students from various States are allegedly involved.

Four bookies were taken into custody and a majority of the students had been identified, Guntur Rural SP S.V. Rajasekhara Babu told the media on Sunday.

“Most of the punters are students, youth and traders. The racket has links to several States. As the situation is alarming, we have summoned the parents of the punters. They and their wards have been counselled and warned,” the SP said.

Pasupuleti Nagarjuna, an MBA student of Rajupalem village in Guntur district, contacted the bookies – Ankit Dwivedi, Divyang Singh and Avadeep Pratap – of Bhopal, who created a social media group for organising the betting, the SP said.

“The bookies opened a separate group and Nagarjuna joined it on March 15, 2019. He attracted many punters and earned some lakhs of rupees in the last one-and-a-half months. Nagarjuna hails from a poor family,” Mr. Rajasekhara Babu said.

The modus operandi of the gang was to invite the punters. They would join in the group by paying some amount. The bookies would give the password to the punters.

The punters paid amounts ranging between ₹5,000 and ₹25,000 and resorted to betting. The online racket had network spanning several States, the SP said. “Keeping in view their future, the police have not arrested the students. We summoned the parents of the punters and counselled them. The police will maintain a vigil on the students. As there are many social media groups organising bettings, we have alerted the parents to keep a watch on them,” Mr. Rajasekhara Babu said.

The police seized ₹22.16 lakh cash, and mobile phones and laptops from the accused. Cases had been registered against them under A.P. Gaming Act, the IT Act and other IPC Sections.

“As betting was conducted online and the investigation officers seized the bank account numbers along with their transactions, the accused cannot escape. We request the students not to spoil their lives,” the SP said.

Cricket | ‘Indian players are above temptation’

The threat of online corrupt approaches does not cause much anxiety to BCCI’s head of Anti Corruption Unit (ACU) Ajit Singh, who says Indian players are well aware of the modus operandi of fixers and are quick to report anything suspect. The ICC ACU head Alex Marshall, in an interview to The Guardian, had said […]

Dhoni gets down to brass tacks

The wait is over. Mahendra Singh Dhoni was back in action wielding his willow, at the M.A. Chidambaram Stadium on Monday. The Chennai Super Kings skipper hit the nets to kick-start his preparations for the upcoming Indian Premier League that starts on March 29. Long break Dhoni, who last played in the World Cup semifinals, […]

Tribute to the Mahatma!

It’s fitting that the India-South Africa Freedom series is beginning here on October 2, the 150th birth anniversary of Mahatma Gandhi. There is a common bond that runs through Gandhi, India and South Africa. Indeed, South Africa is an important stop in the inspirational man’s tale. Gandhi spent as many as 21 years of his […]