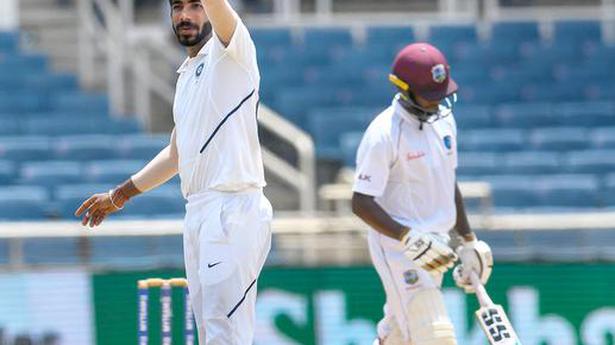 India has been shrewd to keep fast bowler Jasprit Bumrah away from the thick of action in white-ball cricket in recent times and thus make him raring to go for the traditional Test cricket.

With the ICC’s World Test Championship having got off the ground immediately after the World Cup in England, captain Virat Kohli, coach Ravi Shastri and the five selectors believe that the speed merchant with a unique action needs to be preserved for the tough multi-day campaigns and have rested the 25-year-old for white-ball cricket.

Bumrah did not figure in the T20I and ODI series in the West Indies that India won hands down and the lithe pacer has also not been chosen for the T20I home series against South Africa.

After joining Seagram’s Royal Stag dream team as brand ambassador, Bumrah answered in a measured tone when asked about him being kept away from white-ball cricket.

“A lot of thought-process goes behind this. It’s not that I will just rest from white-ball cricket; a lot of preparation goes on during this time. You cannot keep playing all three formats. You need to be fresh as well. So when you come back after a break, you are hungry; you want to do well again and all of that plays a massive role for you to be fit and fresh. So all of that is taken into consideration and then the decision is taken to rest.”

Bumrah has not played a T20I after a match against Australia in Chennai last February and has not played an ODI after the World Cup semifinal against New Zealand. In these two formats also Bumrah has been very impressive, taking 51 wickets at 20.18 and 103 at 21.88.

After what has been a splendid demonstration of speed and skill in 12 overseas Tests, Bumrah is all set to play his first Test in India against South Africa at Visakhapatnam from Oct. 2.

Aware of the excitement around his debut-Test appearance in India, Bumrah said: “I have played all my cricket in India before playing for the country; so these are not alien conditions to me. But playing Test matches will be a different experience and I am looking forward to it. The preparations have already started. And as soon as I join (the team) we will discuss with the team management and the senior players who have played a lot of cricket over here as to what works and what doesn’t. So I will take everything into consideration and let’s see how it goes.”

New Zealand pace spearhead Trent Boult and wicketkeeper batsman Tom Latham are doubtful starters for the home series against India after the duo suffered fractures in the recently-concluded Test series against Australia. Boult was ruled out of the final Test between New Zealand and Australia after fracturing his right hand when he was struck on […]

New Zealand’s debutant pacer Kyle Jamieson termed his maiden international game surreal after he won the Man-of-the-Match award here on Saturday. The Black Caps took a 2-0 lead in the three-match series as Jamieson was involved in a vital partnership with Ross Taylor and then took two for 42. Impact “Pretty surreal. You kind of […]

It wouldn’t be a wrong to say no one player wields as much an influence on a team’s fortunes as Mahendra Singh Dhoni does on Chennai Super Kings this year in the IPL and he showed on Wednesday why he is so vital to the team’s fortunes. After missing the last game against Mumbai Indians […]