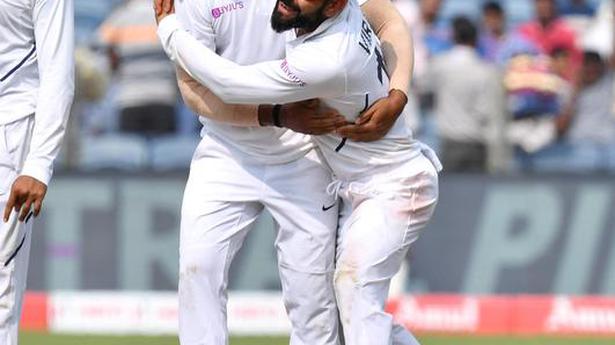 He has been representing India in international cricket for almost a decade. Still, barring the two-year stretch between 2015 and 2017 when he revelled in home conditions, Umesh Yadav has remained in and out of India’s Test team. But the burly pacer made his first outing in 10 months in India’s whites count. The Vidarbha Express’ match analysis of six for 59 was India’s best figures during the second Test against South Africa.

Umesh in an interview with The Hindu in January had admitted he is a rhythm bowler and needs to keep bowling in matches to be at his best. The pacer admitted after India’s crushing win on Sunday that he approached the national selectors to be drafted into the India A side in the West Indies in August.

“When I didn’t play in the Windies, selectors put me in India A but when there is a big gap with ODIs, T20s, I only told selectors that whatever match is there, please let me play as match practice is very important for me,” Umesh said. “It was off-season, we had no Ranji in India, so I told them I would like to play (for India A). When you play matches, it helps. Suddenly, you come from home and play a match, it can be a tad difficult as a fast bowler.”

Despite little game-time in the last 12 months, Umesh has been an integral part of India’s dressing room. He said that the core of the team having remained intact for the last few years has been key in the team’s evolution as the No. 1 Test side in the world.

“Most of the guys are very experienced and know what needs to be done at this level to be successful. So the guys who are coming up the system know that they need to show consistency and as far as team ethics is concerned, everyone understands what the team requires,” he said.

“No one is selfish and everyone adheres and is focused on team plans. As senior players, we are 7-8 guys who have played 40 plus Tests, we know how to play and plan in tests. So new guys who come see that, yes our seniors are putting in so much of hard yards, its not easy for them. They know that they need to get better than us to be in the side.”

Former coach of Indian women’s cricket team Tushar Arothe was arrested for allegedly betting on an IPL match, police said on Tuesday. He was arrested on Monday but was granted bail because he had been booked for a bailable offence, Vadodara Police Commissioner Anup Singh Gehlot said. Mr. Arothe and 18 others were arrested by […]

Rory Burns and England captain Joe Root kept Australia at bay on the second day of the first Ashes Test at Edgbaston on Friday. At lunch, England were 71-1 in their first innings — a deficit of 213 runs. Burns was 41 not out and Root unbeaten on 11. England still had plenty of work […]

Australia’s pacemen laid waste to New Zealand’s top batting order to leave the tourists teetering at 102 for six in their reply to the hosts’ first innings of 467 on day three of the Boxing Day test on December 28. Opener Tom Latham was 42 not out at the lunch break at the Melbourne Cricket […]