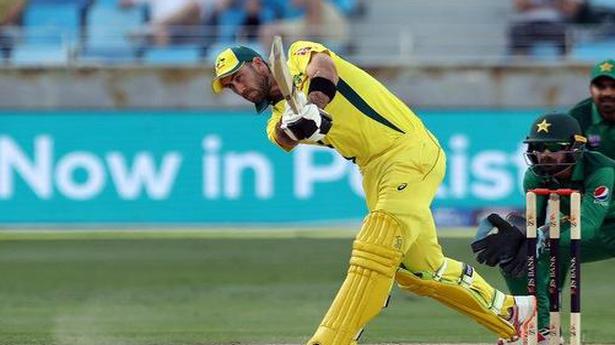 Glenn Maxwell missed a fighting hundred by two runs but still guided Australia to 277-7 in the fourth one-day international against an injury-hit Pakistan in Dubai on Friday.

The dashing middle-order batsman knocked three sixes and nine boundaries in his 98 off 82 balls to lift Australia — sent into bat by Pakistan — from 140-5 to an imposing total on a slow Dubai stadium pitch.

A new look Pakistan team — with Imad Wasim as skipper after Shoaib Malik was ruled out with a rib injury — had caught Australia napping at 101-4 when Maxwell walked in.

He repaired the innings with a 134-run partnership for the sixth with Alex Carey who finished with 67-ball 55 for his maiden fifty with three boundaries.

Maxell, bowled by fast bowler Usman Shinwari off a no-ball when on 76, was within a stroke of his second ODI hundred when he was run out while attempting a double run.

Carey supplemented Maxwell well, as the pair beat the previous sixth wicket stand in Australia-Pakistan ODIs of 90 between Dirk Wellham and Rod Marsh at Sydney in 1981.

Australia, who have already won the five-match series 3-0, brought in fast bowlers Kane Richardson and Nathan Coulter-Nile in place of Pat Cummins and Jason Behrendorff.

The last match will also be played in Dubai on March 31.

It went till the last over, but seasoned campaigner R. Vinay Kumar held his nerves to guide Pondicherry to a four-wicket win over Bengal in a Syed Mushtaq Ali Trophy fixture at the Bandra-Kurla Complex here on Sunday. Chasing a modest 133, Pondicherry required eight runs from the last five balls, and Vinay hammered a […]

No clarity on BCCI preparatory camp

Australia dropped fast bowler James Pattinson from a 12-man squad for the second Ashes test against England starting at Lord’s on Wednesday, with Josh Hazlewood coming in as likely replacement. Fellow quick Mitchell Starc, also overlooked for the first test won by Australia at Edgbaston, was named in the squad but could end up carrying […]