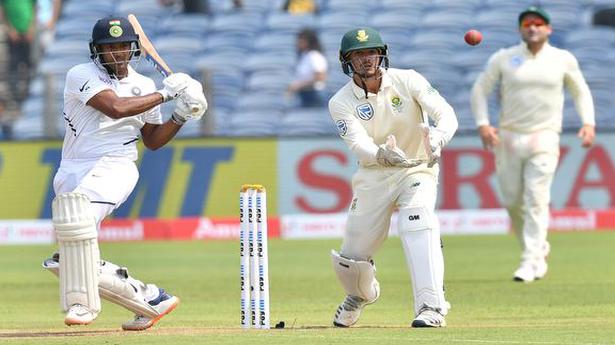 Kagiso Rabada rose to his reputation and troubled the Indian batsmen all through the day by bowling in the perfect channel; Anrich Nortje posed questions with his express pace. And Vernon Philander was consistent as ever.

Still, the South African pace triumvirate couldn’t strike as regularly as they would have liked in conditions that suited them far more than the last week as the Indian batsmen gained an upper hand on the opening day of the second Test.

Opener Mayank Agarwal’s second hundred of the series, backed by fifties by ever-reliable Cheteshwar Pujara and Virat Kohli, helped the home team reach 273 for three when bad light put an end to the proceedings at the Maharashtra Cricket Association Stadium on Thursday.

Mayank’s 138-run partnership with Pujara for the second wicket steadied the ship after Rohit Sharma’s early loss and Kohli and his deputy Ajinkya Rahane then milked the Proteas’ bowling during their unbroken 75-run association to ensure India was set for a second big total in the series.

Unlike in Visakhapatnam, India’s openers had to see the new ball off, with Philander and Rabada sticking to the line just outside off-stump. It resulted in three streaky boundaries in the first hour before Rabada succeeded in getting a nick off Rohit’s blade that rested in Quinton de Kock’s gloves.

It was only when Nortje — who was brought in place of offie Dane Piedt — came into bowl that Mayank got into his groove with a trademark cover-drive off a half-volley that clocked 148 kph.

Had Temba Bavuma at forward short-leg managed to hold on to Pujara’s well-timed flick in Rabada’s next over, India may have been in a spot of bother. While Pujara continued to time the ball nicely, Mayank made use of Nortje’s pace with a straight drive and two glorious cover drives in an over just after drinks.

That over set the tone and the boundaries kept flowing for the rest of the day as India tallied 39 fours and three sixes.

Two of those sixes — which sailed over long-off minutes after tea off successive deliveries off Keshav Maharaj during the left-arm spinner’s marathon 29-over spell — took Mayank from 87 to 99. And a slash past gully off Philander for his 16th four in the next over meant Mayank notched up his second Test hundred.

Rabada, however, ensured Mayank didn’t convert it into a big hundred this time around. The lanky pacer — who had forced Pujara into an error to bring captain Faf du Plessis into play in the slip cordon just before tea — drew Mayank forward for the visiting team’s skipper to pouch his second catch of the day.

Three overs earlier, Maharaj had grassed a return drive by Kohli when on three. The India captain then ensured that he made the Proteas pay for it to raise his fifty and give the 4,000-plus fans a reason to cheer.

With India strengthening its pace department by including Umesh Yadav at the cost of No. 6 Hanuma Vihari, the onus will be on Kohli and Rahane to ensure that R. Aswhin and Ravindra Jadeja will not be required to toil with the bat and instead save the energy for their primary skill on a strip that will increasingly offer more turn.

The final of the Indian Premier League is likely to be held in Chennai on May 12. Although the BCCI, on Tuesday, announced the venues for the league phase that concludes on May 5, it did not name the centres that will hold the knock-out games. However, as per the IPL norms, the defending champion […]