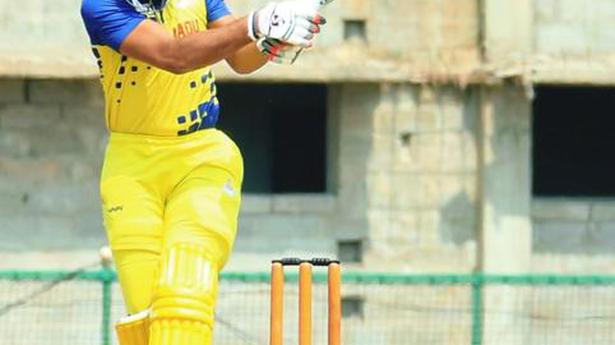 For three quarters of Tamil Nadu’s innings, Kerala had things under control. But the host wasn’t prepared for a late assault from a rookie player and bungled its bowling at the death as it lost the opening match of the Syed Mushtaq Ali Trophy by 37 runs here on Friday.

M. Mohammed had made a total of just 33 runs in his previous 11 T20 games, but against Kerala he scored 34 off 11 balls to help the team post a sizeable score.

Put in, Tamil Nadu was labouring towards a moderate total when Mohammed walked in and treated the Kerala medium-pacers with disdain. Basil Thampi bore the brunt of his fury, going for 21 runs in his final over.

The bowling was disciplined as B. Aparajith and captain Dinesh Karthik found it hard to score runs fluently in their 56-run third-wicket stand.

The advent of Sharukh Khan, after Apararjith retired hurt, changed the momentum towards the visitors. Sharukh put the rival bowlers under pressure with his big hits.

In the death overs, Kerala was ordinary and Mohammed feasted on the wayward bowling to become an unlikely hero.

Kerala never threatened in its chase after Robin Uthappa (9) fell early trying to clear the infield and spooned a catch to T. Natarajan off G. Periyasamy.

Vishnu Vinod and Rohan Kunnummal scored a few boundaries, but Kerala was always behind the run-rate. A full-toss from Mohammed accounted for the dangerous Vishnu Vinod (18) whose pull landed in the safe hands of Natarajan at mid-wicket.

Both Rohan and Sachin Baby were tied down by accurate bowling from the Tamil Nadu spinners and as the run-rate crept up, the batsmen tried extravagant shots, only to perish.

Left-arm medium-pacer Natarajan took three wickets in his second spell as Kerala lost its last five wickets for just 14 runs to finish at 137 for eight.

The Afghanistan under-19 team scripted a stunning two-wicket victory over India in a low-scoring fifth Youth ODI here on Saturday. The five-match series, though, ended 3-2 in India’s favour. Electing to bat, India was bowled out for 157 in 49.3 overs with Vikrant Bhadoriya (29) and Kumar Kushagra (24) being the main scorers. Noor Ahmad […]

It will be a bigger challenge to beat Australia in 2020 Test series: Ganguly

BCCI president Sourav Ganguly feels beating Australia on their home soil will be a bigger challenge for India next year compared to the one in 2018-19 when Steve Smith and David Warner were not present in the opposition ranks. Smith and Warner were serving ball-tampering bans when India won their first series in Australia, ending […]

Mumbai needs to turn the tide

Effective away, lame ducks at home. With the kind of Ranji Trophy season Mumbai has had so far, time is running out for the domestic giant to turn the tide and keep its hopes of regaining the coveted title. The Group B game against Uttar Pradesh, starting at the Wankhede Stadium on Sunday, is perhaps […]