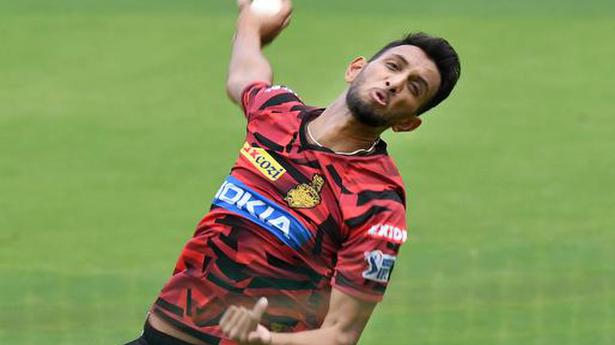 Seamers Prasidh Krishna from Karnataka, and Mukhtar Hussain of Assam have been selected by the MRF Pace Foundation to undergo a two-week training programme in Australia.

MRF head coach M. Senthilnathan, who will accompany them down under, told The Hindu on Friday that “the boys will practise in the National Cricket Academy in Brisbane.”

Senthilnathan added, “They will be guided by acclaimed coach Troy Cooley and will also have bio-mechanics done. It will be hugely beneficial to them.”

Talking about the two pacemen, Senthil said, “Prasidh is tall, has a high-arm action and gets natural bounce. He bowls at speeds around 140 kmph and has the ability to move the ball both ways from a semi side-on action. He also has a handy short-pitched delivery and holds plenty of promise.”

Mukhtar is not as tall as Prasidh but is a nippy bowler who is deceptively quick off the surface. “The ball hurries into the batsman after pitching,” said Senthil.

Like Prasidh, he is someone with a semi side-on release and has this knack of picking wickets. “He essentially brings the ball in, reverses it. Mukhtar also takes the new ball away from the right-hander at a healthy pace,” Senthil weighed in.

Senthil said, “Both these lads have a bright future. They will be better bowlers when they return from Australia.”

What is the concussion test in cricket?

The story so far: Australia’s Steve Smith, batting on 80, was floored by a bouncer from England pacer Jofra Archer in the first innings of the second Ashes Test in London on August 17. Smith was hit on the back of his neck close to his head at a spot that was not protected by […]

Aiden Markram made the most of the chance to bat to score his second century on this tour (100 retired hurt) and take South Africa to 199 for four at close of the second day’s play against Board President’s XI at the Dr. PVG Raju Sports Complex here on Friday. Bad light stopped play immediately […]

South Africa defeated Sri Lanka by 113 runs in the second One-Day Internationals on Wednesday to take a 2-0 lead in the five-game series. Chasing a target of 252, the visitors were bundled out for 138 in 32.2 overs with Kagiso Rabada scalping three wickets, while Lungi Ngidi, Anrich Nortje and Imran Tahir picked two […]