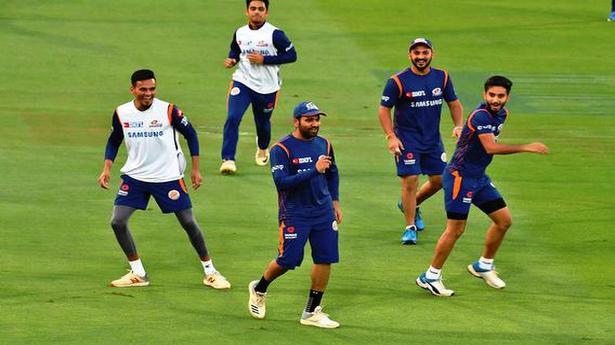 Mumbai Indians players, who had a full-length training session at the Rajiv Gandhi Stadium on Friday, will bank on the ‘feel good’ factor from the last time they played in an IPL final here in 2017 when they defeated Steve Smith-led Rising Pune Supergiant (which also had M.S. Dhoni) by a thrilling, one-run margin.

For the captain Rohit Sharma, it will be a familiar turf having played for Deccan Chargers earlier in the IPL.

With MI having an imposing record of three wins in 2013, 2015 and 2017 in the four finals it has played (losing to CSK in the 2010 edition), the fans may not be faulted in hoping the big names — star player Rohit at the top and Kieron Pollard in the lower-half of the batting line-up — fire in the summit clash.

By their own standards, both Rohit (390 runs from 14 games) and Pollard (240 from 15 games) are clearly due for game-changing innings this season.

It was the South African opener Quinton de Kock who has been the lead scorer with 500 runs from 15 matches including four half-centuries and Surya Kumar Yadav (409 runs from 15 games) playing a perfect second fiddle.

The fact that even Yuvraj Singh played just four matches, scoring 78 (53 highest score) this season is a hint that Mumbai, like Chennai, rarely tampers with the line-up.

In fact, MI has rested someone like the dangerous Ben Cutting, who fans will remember for his all-round display in Sunrisers Hyderabad winning the 2016 final in Bengaluru.

He has played just three matches scoring 18 runs! Interestingly, Yuvraj was also a part of SRH’s victorious campaign then.

The body language of the Rohit-led MI players at the training sessions suggests that they are ready for the big challenge under the lights even as the BCCI chief curator Daljit Singh is monitoring the HCA curators Y.L. Chandrasekhar and Mukesh Kumar and their team preparing what is expected to be a perfect T20 wicket.

Ajinkya Rahane spoke his mind about not being given a consistent run in ODIs. He played his last match against South Africa in Centurion on January 16, 2018, and made an unbeaten 34. It’s more than a year since, and Rahane has not found a place in the Indian team for the limited-over games and […]

Ravindra Jadeja tripped in his follow-up while going for a vociferous appeal early on in the morning. Rohit Sharma tumbled over an enthusiastic fan who managed to breach the security barrier and meet his idol. And the South African wickets continued to tumble as frequently as they did the evening earlier. After an action-packed morning […]

(If you are viewing this on The Hindu app, click this link to open the scorecard in your browser) Preview The dynamics of the playoffs are different. Here, it’s a lot about creating opportunities, withstanding pressure and executing plans. Winning key moments matter. Of course, end-game skills are critical to the outcome. In these […]