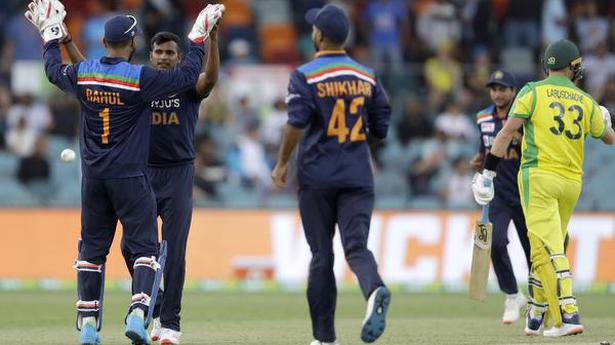 From Chinnappampatti to Canberra, it has been a fascinating journey for the yorker specialist

Natarajan’s success shows it is all right to dream and dream big.

Natarajan’s, though, was no flight of fancy. His dream was backed by sweat, blood and titanic struggle.

Son of a daily wage labourer, Natarajan came from Chinnappampatti, a hamlet near Salem.

Cricket was an escape for him — from abject poverty — and it was in the dusty lanes of his village and with a tennis ball that he first learnt to bowl yorkers.

Bowling is a lot about understanding your craft and, with the tennis ball, Natarajan learnt his release point, the most important element in bowling yorkers.

And it is this potent high-risk delivery — you require guts to bowl a sequence of it — that has catapulted him to the Indian cricket. And when Natarajan walked out with the Indian team for his first international game in Canberra’s quaint Manuka Oval, the occasion marked a triumph of the spirit.

Natarajan, not showing any nerves on his debut, contributed to India’s 13-run ODI victory over Australia with two important wickets at vital stages; Marnus Labuschagne with a short-pitched delivery and then removing a battling Ashton Agar towards the end.

Yes, his scorching yorkers were on view. And the manner Natarajan pulled himself back after an expensive over ‘at the death’ revealed his character. Being a left-armer he brings a different angle to the Indian attack, something the team-management has been seeking for long.

The 29-year-old Natarajan’s cricketing journey has been fascinating, every aspect of it; clinging on to cricket as his lifeline, bowling, astonishingly, with a cricket ball only at the age of 20.

He then broke out of his poverty-stricken life, rose in the Tamil Nadu ranks, overcame problems with his bowling action, went for big money at IPL auction but ran into injury hurdles for Kings XI Punjab and then came back strong this year for Sunrisers Hyderabad.

He had filled up physically, upped his pace, and unleashed his yorkers, often six of them in an over, with great precision.

Brave-heart Natarajan’s tale is heart-warming. And it has only just begun.

The 64-year-old former captain, who played 102 Test matches for England between 1977 and 1992, is a prominent Brexit supporter Source: thehindu.com Related

Sibley comes good in the second outing as the home team wipes out the first innings deficit Source: thehindu.com Related