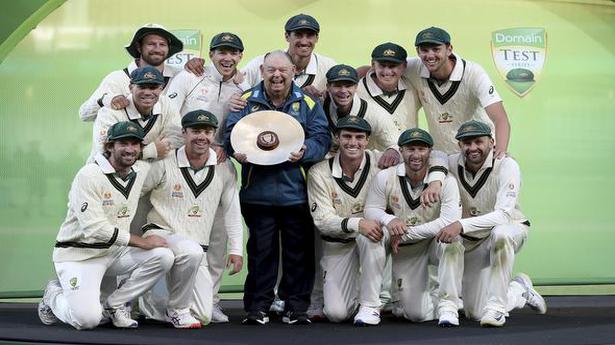 Nathan Lyon picked up five wickets to spin Australia to an emphatic innings and 48-run victory in the second Test against Pakistan on Monday as the hosts swept the series 2-0.

Asked to follow-on, Pakistan’s batsmen battled hard to make Australia bat again but were bowled out for 239 in their second innings shortly after the dinner break of the Day-Night Test.

Denied a wicket despite some good spells in Pakistan’s first innings, Lyon smashed through the defences of the Pakistan batsmen on a docile pitch, removing Shaan Masood and Asad Shafiq before tea after both had scored defiant half-centuries. He returned to break another stubborn 47-run partnership between No. 6 Iftikhar Ahmed and wicketkeeper Mohammad Rizwan, with Marnus Labuschagne finally catching a nick at short- leg after grassing three chances earlier.

With Iftikhar, Pakistan’s last specialist batsman gone, it was only a matter of time for the tourists.

Yasir Shah was unable to repeat his first innings heroics when he scored an unlikely ton. He fell for 13 when trapped lbw by Lyon and duly threw away a referral trying to overturn the decision.

The dinner break held up Australia’s victory march but it took the second new ball shortly after the interval, allowing Josh Hazlewood to bowl Rizwan.

A comical mix-up between tail-enders saw Pat Cummins run out Mohammad Abbas for the final wicket to wrap up the match.

While Lyon enjoyed the spoils on day four, the match belonged to opener David Warner, who scored an unbeaten 335 to drive Australia to a mammoth first-innings total of 589 for three.

Australia won by an innings and 48 runs.

Australian pacer Kane Richardson, who was a part of the World Cup squad last year, is hoping to get game-time in what he referred to as the toughest test for a bowler in white-ball cricket. “It’s the biggest challenge in white-ball cricket, coming over here and playing against India on the surfaces over here. It’s […]

2019 Cricket World Cup | Passion and perseverance have been his forte

In searing heat, on his way to the venue for a crucial match, Shikhar Dhawan came down with a flat tyre and he had no option but to walk the rest of the way. So, he walked, and ran, pushing the two-wheeler along, and managed to reach, sweating and panting, just in time to make […]

Australia cruised past Sri Lanka to clean-sweep their three-match Twenty20 series Friday, with an in-form David Warner grinding out a third successive half-century in the seven wicket win. The home team have been dominant throughout, winning by 134 runs in Adelaide and by nine wickets with seven overs to spare in Brisbane ahead of the […]