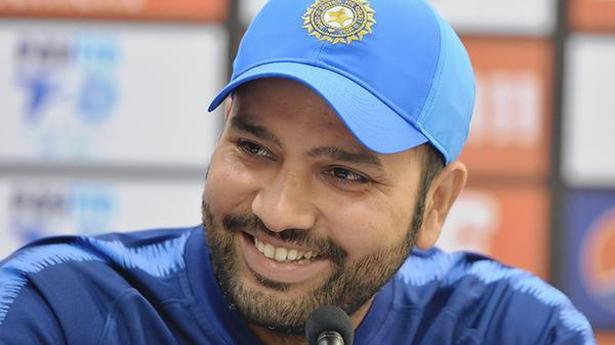 Caught unaware about the Super Over scenario, Rohit Sharma took five minutes to “find” his abdomen guard after the third T20 International against New Zealand had ended in a tie here on Wednesday.

The India vice-captain said the team had almost given up with New Zealand going great guns at one point.

“Everything was packed. All my stuff was inside my bag. I had to get it out.

“It literally took me five minutes to find my abdomen guard because I didn’t know where it was,” Rohit said.

“I mean we never thought it would go to the Super Over, the way they were batting at one point. It looked like they could easily win the game,” he added.

Rohit said there is no training possible for Super Over eventualities.

In fact, the Indian team wasn’t aware of the Super Over and came to know only after the match had finished in a tie.

“I don’t know if you can train for a Super Over. We’ve got a T20 specialist in Bumrah. Super Over or whether he bowls in a T20 match is the same for him. There’s no training required there for him.

“But for the batters, you generally see who’s in good nick on that particular day and you assess and try and get that guy to bat. Probably if I hadn’t got the 60 today, it wouldn’t have been me going to face the Super Over. It could have been Shreyas Iyer or someone else.”

Talking about the moment when he hit those successive Super Over sixes, Rohit said it is always the bowler who is under pressure in such situations.

“From what I’ve seen in Super Overs, whatever you are chasing, it’s the bowler who is under pressure. That’s my understanding. That’s why when I walked out to bat, I was thinking about whether I should move around in the crease or stay still.

“There were two or three thoughts like that but, in the end, I decided that I will stay still. Let him make the mistake.

“That was my thought process. And, he bowled it in my zone, and I smashed it.”

Goud back to where it began

For 15 years, Yere Goud made the Karnail Singh Stadium here his home. On Saturday he was back, this time leading Karnataka and trying to plot Railways’ — the host and his erstwhile employer — defeat. Karnataka had a good beginning to the season, winning the Syed Mushtaq Ali Trophy (T20), and Vijay Hazare (one-dayers) […]

The aura of invincibility India built in recent years, especially at home, in the limited-over format has vanished. In what was the team’s last ODI before the World Cup, the collective performance of a puzzling combination left more questions unanswered than it started out to address. In addition to the persisting middle-order woes and lack […]

Indian Premier League | The day you wish it was, and isn’t

In an ideal world, crowds in Mumbai would have trudged out of a busy Churchgate station, mostly in Blues, with a liberal sprinkling of canary yellow among them making their presence felt. But this was not an ideal Sunday, as it’s not an ideal world. It’s the COVID-19 world where life doesn’t have life anymore […]