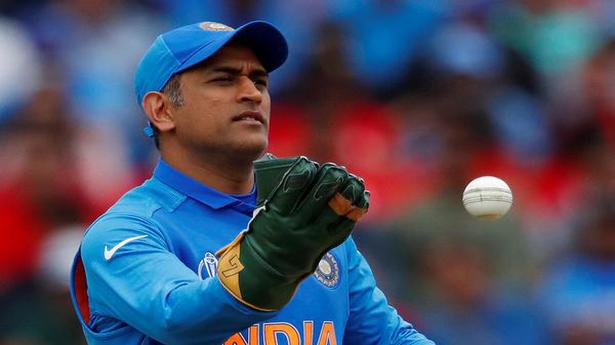 It is difficult to escape M.S. Dhoni’s presence in his hometown. On the road out of Birsa Munda Airport, he is on a mural on the wall, positioned next to the three ICC trophies he won as captain. At the JSCA Stadium, his name is on the southern stand. And if you care to ask, on every street corner there is someone who claims to have played tennis-ball cricket with Ranchi’s favourite son.

“Today, if people have heard of Ranchi, it is because of Mahi bhai,” said Shwetabh Upadhyay, one of the several local bowlers called to assist in India’s nets session on Friday. “I have met him. He is completely down to earth. To us, he is Bhagwan (God). What else can I say?”

Dhoni’s name also came up in Friday’s pre-match press conference, although for entirely different reasons. With Sourav Ganguly, the BCCI’s president-elect, stating recently that he would discuss Dhoni’s future with the selectors, Wriddhiman Saha was asked what he made of the matter. “It’s Dhoni’s personal choice,” he said. “It’s not for me to decide.”

Talk of Dhoni’s retirement quickly stirs up emotions in Ranchi. “We can’t think of him quitting,” said the former Bihar captain Adil Hussain, who also led a young Dhoni at Central Coal Limited in the Ranchi League. “When people from here travel to different cities and say they are from Ranchi, the usual response is, ‘Oh, you are from Dhoni’s land.’ There is no Ranchi without Dhoni. He still has a lot of cricket left in him.”

Hussain’s most recent meeting with Dhoni was in January last year, when the former’s mother was ailing. “My house was crowded. Relatives and friends all came home just to meet him. But he spoke to everyone with so much humility. He sets an example on how a celebrity should behave,” he said.

Dhoni was rumoured to be hosting his India teammates at dinner on Friday, in his farmhouse on the outskirts of the city. On Saturday, he is expected to watch the third Test from the president’s box at the JSCA Stadium.

At a practice ground inside the stadium complex, Upadhyay expressed his anger at the speculation around Dhoni’s future. “Who are we to say to him when to retire?” he asked. “The experts who are saying he should go… how many trophies did they win for India?”

Ruthless bludgeoning of the cricket ball by its three reliable musketeers — Nitish Rana, Robin Uthappa and Andre Russell — powered Kolkata Knight Riders to a crushing 28-run win over Kings XI Punjab in the Indian Premier League at the Eden Gardens here on Wednesday. The trio’s fireworks spurred KKR to 218 for four, the […]

Delhi Capitals won the toss and elected to field against Kings XI Punjab in an Indian Premier League match in Mohali on Monday. Delhi had one change from their last game and fast bowler Avesh Khan has been brought into the playing XI in place of out-of-form veteran Amit Mishra. Teams KXIP: KL Rahul, Mayank […]

Everyone is keen for IPL to go ahead: Cummins on fate of Indian Premier League

The costliest foreign player in Indian Premier League, Pat Cummins says everyone, including his team Kolkata Knight Riders, is still hopeful of the 13th edition of the T20 event to go ahead sometime later. The Australian, however, conceded that the priority now is to minimise the risk of spreading the coronavirus. The IPL was originally […]