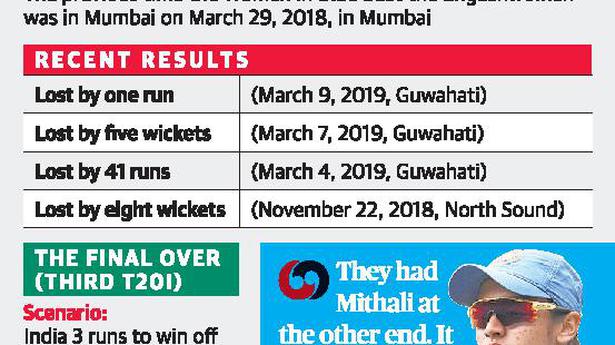 “It is a young side; it will learn along the way,” the coach said. “Though the scoreline says 3-0, it wasn’t a total washout.”

Looking back at the twin series — India had won the ODIs 2-1 — he said the bowlers had done a fantastic job. “The girls also fielded really well,” he said. “It’s just that the newcomers have to get a little bit of experience to know what to do under pressure.”

He sounded upbeat about the future. “From here on, the only way is up,” he said. “That’s the way I’d look at it.”

Captain Smriti Mandhana said she could lead the side in a better frame of mind in the last two games. “I was nervous in the first, but I threw it out of my system,” she said. “Today our bowlers were brilliant.”

Earlier, Kate Cross spoke about her final over, which won her the Player-of-the-Match award. “I think when you have a low total to defend, you probably have nothing to lose as a bowler, because you are expected to fail,” said the seamer.

“I had a chat with (captain) Heather about the field setting and creating some pressure and some dot balls. Thankfully those plans went my way.”

The doubting thomases “should be careful” about what they wish for as there is no second coming for a once-in-a-generation player like Mahendra Singh Dhoni if people “push him into retirement”, former England captain Nasser Hussain said on Saturday. Hussain, one of the most respected voices in world cricket feels that the soon-to-be 39 year […]

Domestic cricket will start as and when conditions permit, says Sourav Ganguly

The domestic season is now expected to begin with the Syed Musthaq Ali T20 tournament, tentatively from the third week of November. Source: thehindu.com Related

Karnataka fast bowler A. Mithun recorded the first ever hat-trick in a Vijay Hazare Trophy final when he got Tamil Nadu’s Murugan Ashwin to sky a catch to K. Gowtham at cover. His five-for took him to the top of his team’s wicket-taker list (20 wickets). Earlier in the day, Mithun had given Karnataka the […]