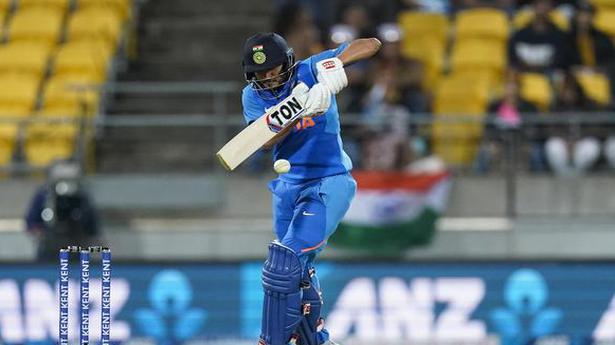 Crediting India’s second successive Super Over win against New Zealand on January 31 to the team’s never-say-die attitude, middle order batsman Manish Pandey said they will push for an unprecedented 5-0 series whitewash in the fifth T20 International.

A nervous New Zealand threw it away yet again as a perseverant India prevailed in the Super Over for the second successive time to take a 4-0 lead in the T20I series. The two sides meet for the final match at Mt. Maunganui on Sunday.

“It has been our motto, not only for these two matches, that till the time the last ball is bowled, we won’t give up any match. If you play with that intent you will get matches like these where you might get a Super Over, and you win from there,” Pandey said at the post-match conference.

“And now we have an opportunity to make it 5-0 and it will be really amazing to do that. Come the fifth match, we will look to go 5-0 up, that is our plan. Nobody has done it before and especially India has not done it before. So, I think it will be a great start to do that.”

Asked if the players believed they could pull off a Super Over win yet again as they did on Friday, Pandey said, “In the middle, it looked like we were a little easy on ourselves. But since it had happened the last game, we thought we had to bowl good balls and it is possible we push it to a Super Over. And then, as the balls went by and we reached the last two balls, we were certain that this would go to Super Over.

“We were ready for it in the back of our mind. We have very good bowlers and Shardul (Thakur) bowled a very good last over. For his effort, he deserved it that the game went into a Super Over,” said Pandey who made 50 not out off 36 balls.

India’s fielding once again came under focus, as windy conditions in Wellington did not aid them. Pandey said preparation was vital in such scenarios as it helps get the basics right.

“It becomes difficult to take high catches when there is stiff breeze or wind as the ball starts moving when coming down. Even if you set yourself nicely, the ball still moves around. We need to practice more so that it becomes easier in matches. It’s up to the individual how he prepares himself and sets himself,” he said.

Throughout the home season, the 30-year-old Pandey has been batting lower down the order, particularly at numbers five and six. Against Sri Lanka, West Indies and Bangladesh at home, and in New Zealand now, he seems to have settled for the finisher’s role.

“I have no choice. I have to be good with it. I have to start preparing my mind as a no. 6 batsman because normally I bat up the order, no. 3 or no.4. Here with the competition up the top, you just have to wait for your chances,” the right-handed batsman said.

“Today was the opportunity and I’ve been preparing myself as to how to bat at no. 6 and what kind of shots I can play, what kind of bowlers, and how many overs are left. It’s not an easy position to bat at no. 6, where you know you are the last main batsman and you have to play with the bowlers if anything happens up the top. That’s what happened today. I was pretty clear about my role.”

He said he was prepared to play percentage cricket, curb down on his shots and not be too expressive early in his innings.

“I just have to play those twos, look to rotate the strike. I’ve been working on that and today I thought it came off really well. If you want to bat at six, then you have to be pre-ready. The game is already set for you at no. 6 and you just have to sometimes go and perform at the speed that the previous batsmen have set for you,” Pandey said.

“Today, I had opportunity to bat a little early. Not too much to contribute the last couple of games, but today was my opportunity and I thought if I could use it to my advantage, that will be great for me and my side. Quite happy to be there in this position.”

Pandey, however, said he still relishes batting higher up at No. 3, like in the IPL. He also said that head coach Ravi Shastri has been helping him prepare to play the finisher’s role.

Luck went against us, says Munro

Colin Munro instead gave credit to the visitors, saying they “always” find a way to bounce back. Munro and Tim Seifert scored half-centuries to tie the scores at 165 runs each for both sides, but India held their nerves to end up victors in thrilling fashion for the second game running.

“That’s cricket isn’t it? We put ourselves in positions to win both of those games I thought. But India, with the roll they’re on at the moment and the cricket that they’re playing, they always just find a way. And then Super Over is a bit of luck each way. It can go either way I reckon,” he said.

“We’re all sitting in the sheds now and talking about it and hurting that we have let two games like that slip. And, I put my hand up too. We talk about running quickly between the wickets and then I was dawdling with that second one, and Kohli picks up and does some magical work and that’s it.

“There are a few guys that are hurting. But we are tight in our group and we will bounce back, come Sunday hopefully, he added.

Munro said New Zealand were happy with the target they had set for themselves. At one stage they were coasting through it, when Seifert and himself put on 74 runs for the second wicket. Regular wickets thereafter put paid to any chances of victory.

“I thought I should come out a bit harder and play some shots early. To be brutally honest, they’ve bowled really well to me after that first game in Eden Park. They’ve come straighter at me and put two guys out on the leg-side and sort of attacked my body a lot more.

“And the nature of the new-ball on this wicket and it was sticky and holding a bit every now and again. It probably was nice for me to show that maturity and getting through that tough phase against the new-ball and getting myself in and very disappointed with the way I got out but it’s nice to sort of contribute to a team total.”

However, it is not all doom and gloom for his team, feels Munro.

“It’s not like we’re being blown off the park. 202 in the first game and they chased it down. The only game where we probably didn’t step up to our standards was the second one at Eden Park, where we fell 15-20 runs short. I think we’ve been playing some good cricket. India have just been 1 or 2 per cent better than us, he said.

The turning point came when Virat Kohli’s speedy turn and throw ran Munro out. The batsman admitted he was caught unawares by the speedy fielding effort.

“I just saw Shardul throw towards the wicket-keeper’s end or the bowler’s end, whichever one it was, and I saw it going over and I thought oh well it’s going to the non-danger end for me, and when I saw Kohli catch the ball and spin around, then I thought crap I’m in a bit of trouble here. And then he hit like he usually does.”

The Secretary to Sri Lanka’s Sports Ministry has filed a complaint at its special investigations unit to investigate the charge Source: thehindu.com Related

Dhoni did it at the heat of the moment just like me in Nidahas Trophy, says Shakib

Bangladesh all-rounder Shakib Al Hasan could relate to Mahendra Singh Dhoni’s recent outburst at the umpire during an IPL encounter as he was in former India captain’s shoes exactly 13 months back during an international T20 encounter against Sri Lanka. In a rare public show of anger, Dhoni breached the Players’ Code of Conduct entering […]