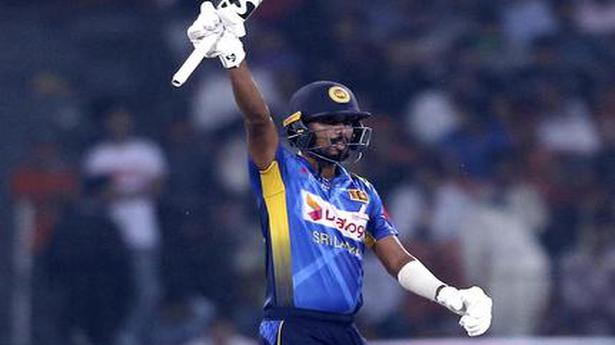 A second-string Sri Lanka team whitewashed top-ranked Pakistan 3-0 by registering a 13-run victory in the third and final T20 on Wednesday.

Needing 54 runs off the last five overs with eight wickets in hand, Pakistan again stumbled in its run-chase for the third successive time in the series and was restricted to 134-6.

Sri Lanka won the first match by 64 runs and then beat them in the second by 35 runs before Pakistan failed yet again on Wednesday night in front of a packed 27,000 fans at the Gaddafi Stadium.

Leg-spinner Wanindu Hasaranga claimed three wickets in two overs to finish with 3-21 and also grabbed a well-judged catch at the long-on boundary to dismiss dangerman Imad Wasim as the Pakistan batting crumbled in the last five overs.

Earlier, after winning the toss and electing to bat first, Sri Lanka scored 147-7 despite resting five players who had featured in the two earlier victories.

“Unity was the secret (of success),” Sri Lanka captain Dasun Shanaka said after he led his team on a victory lap around the Gaddafi Stadium. “We wanted to thank the people of Pakistan, they supported us, not just the Pakistan (team). All the players were bonded and that was the key to our success.”

The series sweep by a young Sri Lanka team was made even more impressive by the fact that it toured Pakistan without several key players, who pulled out due to security concerns.

Debutant Oshada Fernando, one of the five changes Sri Lanka made, held the innings together with a gritty unbeaten 78 off 48 balls as Mohammad Amir was the only bowler to show some resilience by claiming 3-27.

Fernando dominated a 76-run stand with Shanaka, whose contribution was only 12 but the partnership pulled Sri Lanka out of trouble from 58 for 4.

“We were subdued, we didn’t express ourselves throughout this series,” conceded Pakistan captain Sarfaraz Ahmed, who was yet again clean bowled by Hasaranga. “We need to work a lot in all three fronts, especially fielding. We can’t beat any team if we drop catches like that in the middle overs.”

Sarfaraz himself dropped a simple catch of Sadeera Samarawickrama and also missed down the leg side stumping of Shanaka when the Sri Lanka captain had scored just 1. Shadab Khan missed a skier which could have ended Bhanuka Rajapaksa on 1 in Amir’s second over, while the Pakistan fielders also missed out several run out chances.

But Fernando, who hit eight fours and three sixes, gave Sri Lanka enough runs to defend as he kept putting Pakistan bowlers under pressure. The left-hander was especially ruthless against left-arm seamer Usman Shinwari, who gave away 43 runs off his four overs without a wicket while leg-spinner Shadab also leaked 32 runs off his four wicketless overs.

Sri Lanka lost the preceding one-day series 2-0 but completed an upset in the T20s by clean sweeping a three-match series for the first time.

Priyank Panchal (109, 192b) shone bright on the last day of the second and final ‘Test’ between India-A and South Africa-A, at SDNR Wadeyar Stadium here on Friday. With the match heading for a certain draw, the players shook hands and walked off the field at the stroke of tea. Panchal put on a show, […]

Kings XI Punjab has requested its games to be shifted out of Mohali. The matches are scheduled for April 13, April 16, May 3 and May 5. The Committee of Administrators (CoA) chairman Vinod Rai, while confirming the request from Kings XI, informed that a decision would have to be made after taking into account […]

India is in with a definite chance at the World Cup, says Srikkanth

Krishnamachari Srikkanth knows a thing or two about the ICC World Cup. After all, the belligerent opener — with 38 priceless runs taking on a lethal four-pronged West Indian pace attack on a green pitch with seam movement and bounce — was the top-scorer in the 1983 World Cup final. Kapil’s Devils stunned the formidable […]