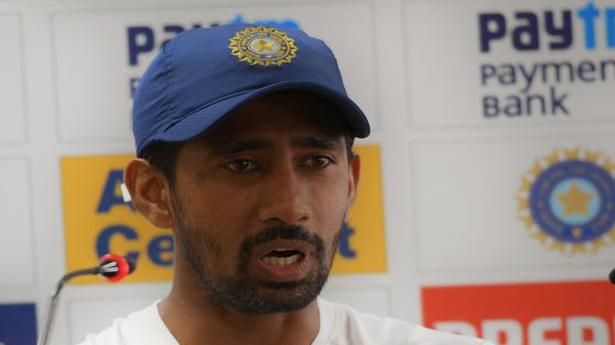 After a spectacular performance behind the stumps in the first two Tests, Wriddhiman Saha has quickly banished all doubts about who India’s best wicketkeeper is.

Virat Kohli labelled him the world’s best while Umesh Yadav, who watched Saha grab two stunning catches off his bowling, felt the ’keeper deserved to be credited with those wickets.

Before the start of this series, it may have seemed that Rishabh Pant was India’s first-choice wicketkeeper; now, there is little doubt about Saha’s status as the No. 1 in home conditions.

But there still linger strange rumblings about Saha’s batting, as if it were a weakness. The Bengal gloveman may not possess Pant’s range of shots, or his explosive power, but he is no bunny.

For evidence, Saha may point to his performance in India’s last Test at the JSCA Stadium. The home side was 328 for six in the first innings, in reply to Australia’s 451, when out walked Saha. He scored a resolute 117 as India eventually went past 600, putting it in the driver’s seat. Had Australia not salvaged a draw, Saha’s innings might have been recalled more readily.

Before the Visakhapatnam Test, Saha had not played for India for over a year and a half, with injury playing a part in his absence. “I was out of the national side for a while but good performances for Bengal and India-A put me back in the Indian team,” he said. “My preparation process remained the same during this period and nothing has changed.”

On Friday, as Kohli batted, Saha watched from behind the nets. It was part of his preparation, he revealed. “I was just trying to have a feel of the bounce off the wicket,” the 34-year-old said.

“It definitely helps. Wicket-keeping is tough, irrespective of the surface. Everybody thinks just because wicketkeepers wear gloves, we can catch all the balls. We prepare according to the nature of the wicket. I adjust to the variations and the bounce of both Ravindra Jadeja and R. Ashwin and keep accordingly.”

The rivalry for the wicketkeeper’s slot with Pant had not affected their relationship, Saha stated. “We discuss a lot,” he said. “We both talk to fielding coach R. Sridhar on how to keep on different wickets. When I am sitting out, like it happened in the West Indies, I observe his wicketkeeping and give him feedback during the practice sessions. Our rapport is really good. He points out my mistakes whenever he observes them.”

Speaking at a tele-conference, the South Africa director of cricket expressed his support for the BCCI president to take over the ICC chairmanship after Shashank Manohar’s term ends this month. Source: thehindu.com Related

The conflict is real, but it might do no harm: BCCI must choose wisely

End of the road for Prasad’s selection panel?

Ever since Sourav Ganguly was announced as president-elect of the Board of Control for Cricket in India (BCCI), murmurs of a rejig in the national selection committee have been doing the rounds. A day after Ganguly’s coronation was formalised, chief selector M.S.K. Prasad hinted that the future was uncertain for him and all his four […]