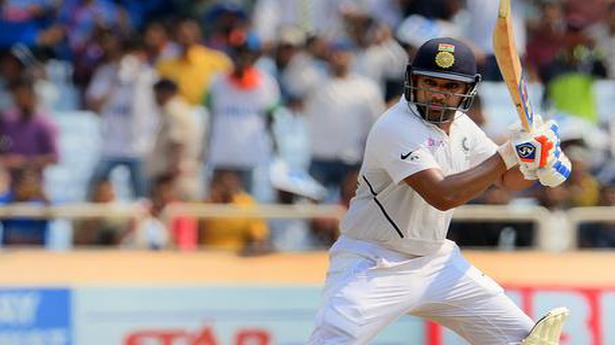 Rohit Sharma sounded excited at the opportunity to figure in India’s first-ever Day/Night Test. The match, against Bangladesh, is to be played at the Eden Gardens in Kolkata from November 22.

“It will be an exciting experience. I have played one match in my career with a pink ball in the Duleep Trophy (September 2016). It was a new experience for me at that time. We will try to play our best and get those 60 points.”

Rohit, who has led India in 15 T20Is and 10 ODIs, said it was an honour to be selected as a captain, even if it’s temporary, for the upcoming T20 series against Bangladesh. He was not perturbed with the number of matches he was to lead in.

“If someone’s made a captain — be it for 10 matches or one match or 100 matches — it’s a very big honour. When we were young, we used to dream about playing for India. We never thought about captaining the team. This is a big honour. Whenever I get the chance to be captain, I accept it with happiness and will try to set an example,” said Rohit.

The current India captain said the pollution would not have any effect on the scheduled match at the Ferozeshah Kotla on November 3. “I just landed today and haven’t had the time to assess the situation. As long as the game is scheduled to be played on 3rd November, it will be played on 3rd,” he emphasised.

Rohit believed it was his job to keep performing at his best. He wants to continue his recent success with the bat. He wants to keep moving forward, especially in the upcoming series against Bangladesh, West Indies and New Zealand. “We are now looking forward to the Bangladesh series,” said the 32-year-old at an event organised by Trusox here on Thursday.

On his recent interaction with newly-appointed BCCI president Sourav Ganguly, Rohit added, “I’ve known Dada for so many years. I’ve played with him also. It was a great time to catch up with him. I congratulated him about this wonderful opportunity, and then discussed about the selection issues, that’s all.”

On Dhoni’s retirement, a visibly irritated Rohit said, “It’s you (media) who create stories and ask questions. I haven’t heard anything about it.”

Jasprit Bumrah (6/16), on Saturday, produced a lethal opening spell and rattled West Indies by picking up the first five wickets. With three of the wickets coming in successive balls, Bumrah became the third Indian to register a hat-trick in Test cricket, following Harbhajan Singh against Australia in Calcutta in 2001, and Irfan Pathan against […]

Delhi Capitals captain Shreyas Iyer won the toss and elected to bat in their IPL match against Chennai Super Kings in New Delhi on Tuesday. Delhi Capitals made one change with Amit Mishra coming in for Trent Boult while CSK named an unchanged side that won their first match in Chennai.   (If you are […]

Andre Russell and Chris Gayle have been named in the Jason Holder-led 15-member West Indies squad for the World Cup in England and Wales starting on May 30. Russell has been in prime form for Kolkata Knight Riders in the IPL and has so far singlehandedly won four games for his franchise. However, Kieron Pollard […]