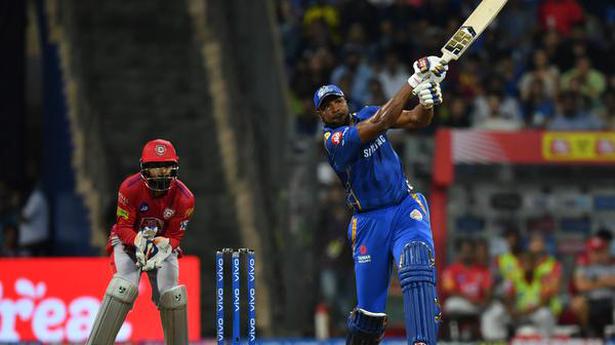 K.L. Rahul converted his third successive 50 into a first IPL hundred. Chris Gayle gave a lesson on how to cut loose after a slow start. But Kieron Pollard marked his maiden IPL game as captain by overshadowing the Kings XI Punjab openers’ efforts to script a memorable win for Mumbai Indians against Kings XI Punjab at the Wankhede Stadium on Wednesday.

Rahul and Gayle’s 116-run opening partnership followed by the former’s big-hitting at the death helped Kings XI pile up 197 for four after being asked to bat. Pollard, leading in the absence of Rohit Sharma who was sidelined due to a right muscle injury he suffered during Tuesday’s training, timed the ball better to pull off a sensational victory.

When Pollard joined opener Quinton de Kock at the crease, Mumbai Indians had been reduced to 56 for two in the eighth over. At the halfway stage, with de Kock being brilliant caught by a running David Miller off R. Ashwin, Mumbai was stuttering at 65 for three.

With 133 required off the last 10 overs, it needed a Herculean effort by the stand-in captain and Pollard lived up to expectations by pulling off a stunner. So effortless was his six-hitting that, despite running out of partners, he continued to take MI closer.

When Mohammed Shami accounted for the Pandya brothers in the 16th over — with 58 needed off 26 balls and a long tail to follow — the game looked all but over. However, Pollard kept clearing the boundary at will. He found an able ally in Alzarri Joseph, who showed composure with the willow despite being ineffective with the ball earlier, going for 22 runs in his two overs.

At the start of the final over, Mumbai needed 15 runs. Pollard started with a six off a no-ball from Ankit Rajpoot and followed it with a boundary off the free hit. Off the next, Rajpoot was rewarded for pitching it short when Pollard pulled straight to deep square-leg where Miller took his fourth catch.

With four required off four and two off one, Joseph and Rahul Chahar helped Mumbai cross the line. Joseph scampered for a two after driving Rajpoot straight.

So thrilling was the finish that it seemed Gayle and Rahul’s superlative efforts came long ago. Rahul and Gayle were stifled by the Mumbai pacers, managing just 20 in four overs.

However, the floodgates opened in the fifth when Gayle went after left-armer Jason Behrendorff. The 23-run over changed the complexion of the game and by the time Gayle holed out in the deep in the 13th over, it was advantage Kings.

Rahul then took charge, taking Hardik Pandya and Jasprit Bumrah to the cleaners en route to his maiden IPL hundred. In the end, it wasn’t enough for Kings, due to Pollard’s blitz.

Mumbai edges through on NRR

Defending champion Mumbai sneaked into the Vijay Hazare Trophy quarterfinals, pipping Uttar Pradesh (UP) on Net Run Rate. The two sides, both of whom had suffered two washouts, were tied on 20 points but UP had the edge with a match in hand. It however couldn’t capitalise, losing its final fixture on Thursday against Haryana […]

Leading into the match, Faf du Plessis suggested that given his rotten record at the toss — he had lost 13 of his previous 19, and South Africa had lost nine tosses in a row in Asia — he might send someone else instead. It turned out he was not joking. On Saturday morning, Temba […]

Bengal wicket-keeper Wriddhiman Saha has been preferred over Andhra’s promising Kona Srikar Bharat for the two-Test series against West Indies to be played in Antigua and Jamaica in August-Septmeber.  The Chairman of the BCCI’s senior national selection committee, M.S.K. Prasad, said in Mumbai on Sunday that the 34-year-old  Saha (32 Tests,1164 runs, 3 centuries, 75 […]