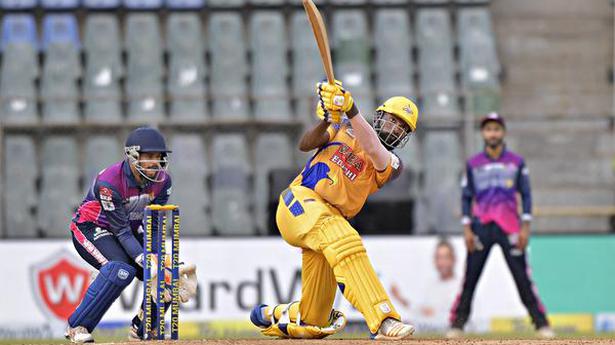 Eagle Thane Strikers’ Rakesh Prabhu, promoted to No. 4 for his power-hitting, lashed eight sixes in 21 balls to inspire his team to a thumping seven-wicket win over Namo Bandra Blasters in a T20 Mumbai clash at the Wankhede stadium on Thursday.

Chasing 149 in 20 overs, Strikers cruised home in the 12th over on the strength of some astounding strokeplay by the burly left-hander (64 not out). Aditya Tare, from the non-striker’s end, admired the shower of sixes while making 50 off 27 balls (5×4, 3×6).

Prabhu strode to the crease in the sixth over with Strikers at 49 for two. “The coach expected quick runs from the batsmen and informed me about the plan to reach the target inside 12 overs to improve our run-rate,”said the Victory CC player, representing Jain Irrigation on the local circuit. “The ball was coming on nicely and I executed the given task.”

Prabhu hammered 25 off Nikhil Date and 23 off Shreyas Iyer. He was quick to judge the length and get under the ball for clean hits over the bowlers’ head. His fourth-wicket stand with captain Tare fetched 91 off just 34 balls.

Prabhu’s teammates ran on to the pitch and hugged him after the victory was sealed. “Players like us are always waiting for an opportunity to showcase our game. The atmosphere in the dressing room was positive,” said Prabhu.

Blasters’ 148 off 20 overs appeared laboured in comparison as the Strikers bowlers, supported by some excellent catching, kept the heat on the batsmen. Shrideep Mangela and Nikhil Patil broke free while forging a sold stand for the fourth wicket after Shreyas’ early exit (25, 22b, 1×4, 1×6) forced the two to join hands. Mangela top-scored with a timely 42 (34b, 3×4, 1×6).

Prabhu’s heroics, however, gave Strikers their third win in five games, though a place in the knockouts is yet to be confirmed.

What was meant to be a timely home series to consolidate the gains from the recent one-day triumphs in Australia and New Zealand produced a late twist in the tale. In the end, the Indian fans wondered whether Virat Kohli’s men were really as strong as they appeared at times. Irrespective of what Kohli would […]

It takes 10 years to become a world-class umpire: Taufel

Famed Australian umpire Simon Taufel, who has been travelling around the country to promote his book Finding The Gaps, ran a Q&A session with local umpires at the Royal Bombay Yacht Club on Thursday, simulating match situations. He asked an umpire as to how he would respond to situations with Virat Kohli. Taufel explained technical […]

Sachin Tendulkar, who was the first to recommend it, on Wednesday welcomed the International Cricket Council (ICC)’s decision to stop boundary count as a way of deciding knockout games in its global tournaments like the World Cup. The ICC on Monday changed the Super Over rule for all its major tournaments following the uproar over […]