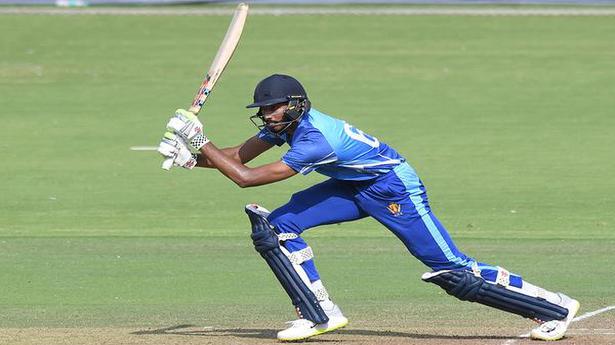 Prasidh Krishna took five for 19 and Devdutt Padikkal scored a maiden List-A hundred as Karnataka booked its spot in the quarterfinals of the Vijay Hazare Trophy with an eight-wicket thrashing of Saurashtra at the M. Chinnaswamy Stadium here on Saturday.

On a pitch which offered early assistance to the seamers, Prasidh and V. Koushik made merry, reducing Saurashtra to 37 for six after the visiting side had been put in to bat.

A fighting 86 by Prerak Mankad and his 150-run stand for the seventh wicket with the equally doughty Chirag Jani (66) helped Saurashtra put together 212.

But it was never going to be enough to stop Karnataka. Opener Padikkal, who had already scored three half-centuries in the tournament, maintained his fine form. The elegant left-hander stroked his way to an unbeaten 104-ball-103 (13×4, 1×6) as Karnataka notched up its sixth win in seven games to remain firmly on top of the combined Elite Group A and B table.

Captain Manish Pandey remained undefeated on 67, his sixth fifty-plus score in seven innings this tournament. He now leads the Vijay Hazare Trophy scoring charts with 471 runs at an average of 94.2.

After the game, Prasidh felt his altered run-up had been a factor in his success. “All these years, I was not consistently having the same run-up from one tournament to the next,” he said. “It would be slightly different every time. After last season, I realised it was creating problems for me. So I had to go and work on it. Now, I know my rhythm, so it is easy.”

Prasidh also had words of praise for V. Koushik, who finished with three for 23. “He is someone who can hit the length consistently,” he said. “One good thing is that there is a great rapport among the fast bowlers. We all have been together for a few years. We are close enough to walk up to someone and help him if things are not going well,” he added.

IPL 2019 | KXIP vs CSK: We can look at some options, says Stephen Fleming

Chennai Super Kings coach Stephen Fleming kept his options about experimenting with the playing XI of the team in Sunday’s clash against Kings XI Punjab in Mohali. “It depends on what happens today (Saturday’s matches). If results go our way, then we can have a look at some options but right now, we are firmly […]

Australia cruised past Sri Lanka to clean-sweep their three-match Twenty20 series Friday, with an in-form David Warner grinding out a third successive half-century in the seven wicket win. The home team have been dominant throughout, winning by 134 runs in Adelaide and by nine wickets with seven overs to spare in Brisbane ahead of the […]