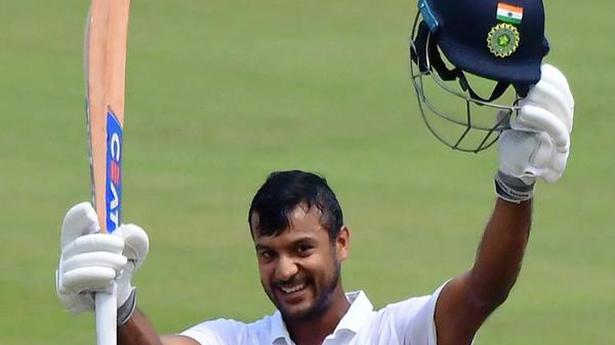 When Mayank Agarwal travelled to Pune late in October 2017 with Karnataka for its Ranji Trophy clash against Maharashtra, the top-order batsman wasn’t sure whether he would be picked in the XI.

Having bagged a pair against Hyderabad a week earlier, the Karnataka management was thinking of dropping him yet again in what was a topsy-turvy ride in First Class cricket for the strokemaker till then.

He was given one last opportunity and he made the most of it by notching up an unbeaten 304 that started a 1,000-run spree in just a month.

Cut to Thursday, the opening batsman continued his love affair with the Maharashtra Cricket Association Stadiumby piling on 108 — his second successive hundred — against South Africa.

Ever since turning into a run-machine in 2017-18, Mayank has cleared the Ranji Trophy, India-A stages successfully before starting his international career on a promising note in Australia at the fag end of 2018. But Mayank had been toiling in First Class cricket for five years before the breakthrough season.

Cheteshwar Pujara, who shared a 138-run partnership for the second wicket with Mayank, stressed on his domestic-circuit experience coming to the fore in the last two weeks.

“He is an experienced player who has scored so many First Class runs, which has helped him a lot and when it comes to not being nervous in his 90s; he is someone who is fearless, he knows how to convert fifties into big scores and, at the same time, once he goes past 100, he can score heavily as we saw in the last game,” Pujara said.

“That habit has come from First Class cricket, so I didn’t have to tell him much. To be honest, we were just communicating what their game plan was. If there was an error in his batting, I would just tell him to play close to his body when his bat was going away. Apart from that, he is batting really well and you don’t have to guide him much.”

I strive to be economical: Rashid

M.S. Dhoni has been a great finisher for Chennai Super Kings and the team might have missed him on Wednesday felt Sunrisers Hyderabad leg-spinner Rashid Khan. “He is always known for this ability and take the team to scores of 170-plus consistently,” said the leg-spinner at the post-match press conference. Rashid said that he has […]

Has the decision to rest M.S. Dhoni for the last two one-dayers of the ongoing India-Australia series inadvertently ended the former captain’s international career at home? Indications are that Dhoni may retire from international cricket after the World Cup this summer. Dhoni is not the man to linger on. Moreover, he has no key reason […]