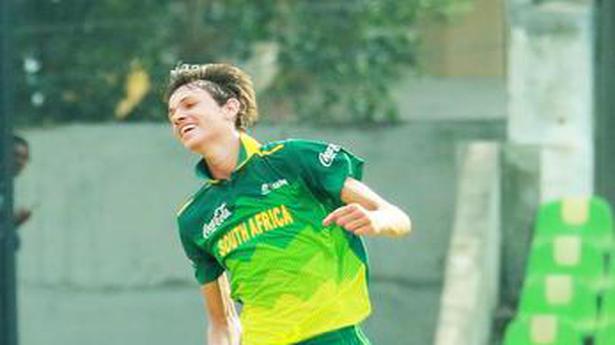 Afghanistan choked and and lost from a winning position against South Africa in the Quadrangular Under-19 one-day series at the Sports Hub here on Saturday.

Chasing 201 for its first win in the tournament, Afghanistan appeared to have sealed the contest, when just 18 were needed from five overs and four wickets in hand.

But Man-of-the-Match Byrce Parson (two for 32) and Marco Jansen (four for 23) dried up the runs as Afghanistan’s lower-order wilted under pressure and lost by nine runs.

Left-arm medium-pacer Jansen profited from Parson’s spell. He first forced the well-settled Islam Khan (21) to edge to wicketkeeper Luke Beaufort while Shafiqullah Ghafri ran himself out for a duck.

In his final over Marco cleaned up Mohammed Hassan Khan (7) and Faxal Haq Farooqi (0) off successive deliveries to give his side an unlikely win.

After Achille Cloete’s twin strikes reduced Afghanistan to 29 for three, the 88-run stand between Farhan Khan (63) and Reyaz Hassan (35) put the chase back on track. However, Parson derailed it with the prize wicket of Farhan.

Earlier, put in, the South African batsmen found the Afghanistan spinners hard to get away.

Luke Beaufort (40) and Byrce Parson (40) added 57 for the fourth wicket without really challenging the slow bowlers. After Parson’s dismissal the South African innings suffered a slump before finishing at 200.

Sheer indifference may have resulted in many cricketers not becoming a member of the Indian Cricketers Association (ICA) in order to take part in its first election through e-voting from Oct. 11 to 13. But some well-known cricketers, male and female, who have played for India and for their States in the BCCI domestic tournaments, […]

Rohit Sharma on Sunday took a dig at the International Cricket Council (ICC) after his name did not feature in a poll initiated by the apex body on who has got the best pull shot in international cricket. The ICC tweeted a collage of Viv Richards, Ricky Ponting, Herschelle Gibbs and Virat Kohli asking “which […]

Indian coaches from Bangladesh’s women’s cricket staff will not travel to Pakistan for the international series next month amid political tensions between the neighbouring nuclear rivals, the country’s cricket board said on Sunday. Tensions are heightened between India and Pakistan after New Delhi revoked the autonomy of restive Jammu and Kashmir in early August. The […]