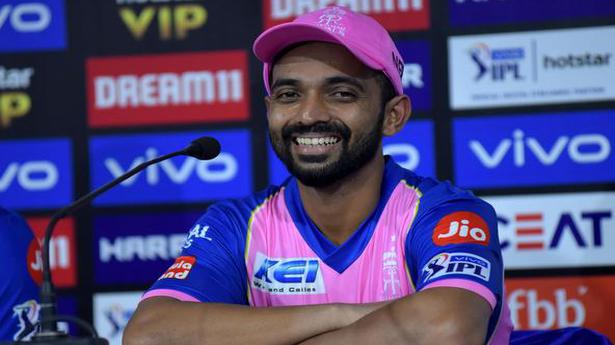 Ajinkya Rahane, not entirely unexpectedly, is back as captain of Rajasthan Royals.

He takes over from Steve Smith who has returned home to Australia for national duty. Rahane had led Royals for much of this IPL, though without a lot of success, before Smith replaced him.

That proved a master-stroke by the team management. The side, which had been languishing near the bottom of the table, posted multiple wins, while Rahane regained his form in style.

In his second match after losing captaincy, he made 105 not out.

Smith’s batting too improved after being given the charge. Under him, Rajasthan won three of the five matches it played and one produced no result.

It may be recalled that Smith was the original choice to lead the Royals before the ball-tampering scandal, because of which he had to serve a one-year suspension.

“Ajinkya has always been a great guiding force for the team,” said Zubin Bharucha, Head of Cricket at Rajasthan Royals.

“We have requested him to take on the captaincy of the team; as a true Royal he has shown great courage and character in graciously accepting the responsibility, which accompanies this role, whilst it would have been easier for him to take a back seat and focus solely on his batting.”

Cricket will come back to the Commonwealth Games (CWG) roster for the first time since 1998 with the inclusion of women’s T20 for the 2022 edition in Birmingham, the Commonwealth Games Federation (CGF) and the International Cricket Council (ICC) announced on Tuesday. Cricket has made just one appearance at the CWG previously, with men playing […]

Veteran South African leg-spinner Imran Tahir said on Monday he would retire from one-day international cricket after the World Cup in England and Wales, which ends on July 14. But he said he would like to continue playing for South Africa in Twenty20 internationals. Tahir, who will turn 40 later this month, played a starring […]