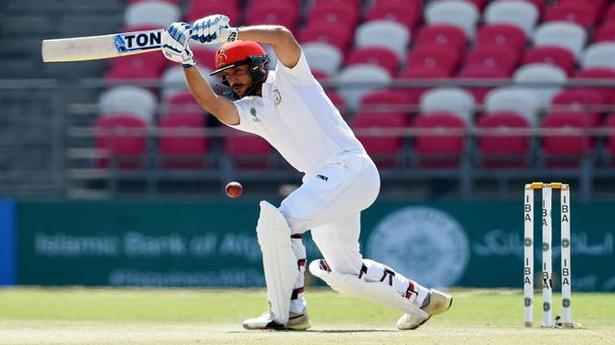 Rahmat Shah fell just two short of his maiden century as Afghanistan produced a commanding batting display to take the upperhand over Ireland on the second day of the one-off Test in Dehradun on Saturday.

Coming on to bat at no.3, Shah scored a patient 98 off 214 balls while Asghar Afghan (67) and Hashmatullah Shahidi (61) hit their maiden half-centuries to propel the ‘home team’ to 314 all out in 106.3 overs in reply to Ireland’s paltry first innings score of 172.

At stumps on the second day, Ireland were 21 for one in 12 overs. The Irish still trail Afghanistan by 120 runs.

Resuming at an overnight score of 90 for two, Shah and Shahidi shared 130 runs for the third wicket to set the platform for a 300-plus total. Shah struck 15 boundaries during his knock while Shahidi hit six boundaries.

Skipper Afghan’s 67 came off 92 balls with the help of six boundaries and four hits over the fence.

Russell is much more than a six machine

Andre Russell is not just a big, mean machine that churns out sixes. There is a lot of thought process behind his mayhem in the middle. When he surfaced in the international cricket in 2010, Russell was essentially a fast bowler — he could generate considerable speed — who could also swing his bat around. […]

‘These boys really made us proud’

Thousands of ecstatic fans celebrated on the streets and a stadium crowd screamed “we are the champions” as Bangladesh returned home to a hero’s welcome on Wednesday after winning the ICC Under-19 Cricket World Cup. It stunned four-time winner India in the final on Sunday in Potchefstroom. A flight carrying the players landed at Dhaka’s […]