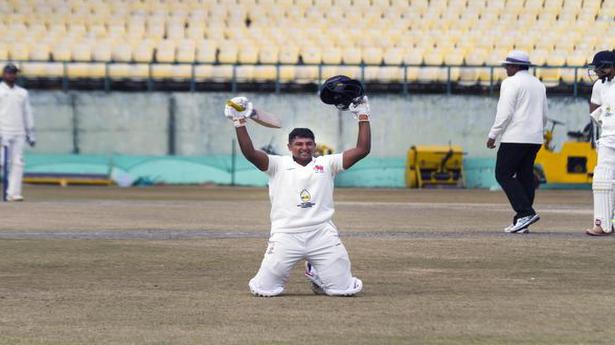 Sarfaraz Khan (226 n.o., 213b, 32×4, 4×6) continued his sensational form with a stellar unbeaten double hundred to bail Mumbai out of trouble on the opening day of the Ranji Trophy Group B match against Himachal Pradesh at the scenic HPCA Stadium on Monday.

After asking Mumbai to bat, the new-ball duo of Abhinay Kanwar and Vaibhav Arora sent back the top-three, but nothing went in Himachal’s favour after that.

Arora sent down two charming in-swingers in the fourth over that got the openers — both shouldering arms. Jay Bista was rapped on the pads and Bhupen Lalwani’s off-stump was uprooted.

When Kanwar castled Hardik Tamore, who was late on the ball off a straight one in the next over, Mumbai was in danger of folding up early. But, Sarfaraz took the pressure off a stuttering Siddhesh Lad by taking the attack to the opposition. Once the moisture evaporated, Sarfaraz was into his stride.

Despite losing Lad, Sarfaraz crossed fifty as Mumbai ended the session at 118 for four. The next two sessions saw Sarfaraz literally kill the contest. He raced from 52 to 100 in just half an hour after lunch, with his five fours in a Pankaj Jaswal over being the highlight.

Similarly, despite watching Tare chase a wide one from Raghav Dhawan to be caught behind and end the 143-run partnership, Sarfaraz launched another assault after tea. The bowlers were left clueless as he raced from 132 to 200 off just 43 balls.

Ranjane and Sarfaraz have put on 158 runs for the unbroken sixth wicket off 157 balls.

Fast bowler Keemo Paul has replaced seamer Miguel Cummins in the West Indies’ 13-member squad for the second Test against India, starting on Friday in Jamaica. Paul, who missed the first Test due to an ankle injury, is now available for selection, the West Indies Cricket Board (WICB) said in a statement. Besides, West Indies’ […]

Former opener Vikram Rathour will be replacing Sanjay Bangar as India’s new batting coach while Bharath Arun and R Sridhar were expectedly retained as bowling and fielding coaches respectively. The senior national selection committee headed by MSK Prasad has recommended three names each for all the support staff positions and the top names in each […]

Sourav Ganguly has assured full support for the development of cricket in Jammu and Kashmir after a delegation comprising regular skipper Parvez Rasool, mentor Irfan Pathan and a senior official met the Board of Control for Cricket in India (BCCI) president here on Monday. It was learnt that a host of issues with regards to […]