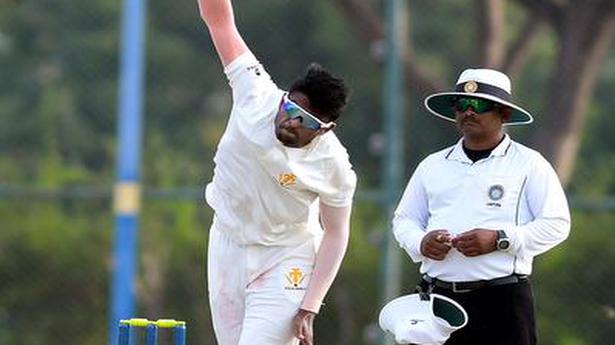 Karun Nair sweated it out at the practice session on Sunday along with the rest of his Karnataka teammates as it was business as usual for the teams at the Karnail Singh Stadium here.

Back to leading the side after missing out on the previous game, Karun is aware the competition enters its business end and a win here against Railways in the Ranji Trophy match starting on Monday would put the team back in the reckoning for a spot in the knockouts.

It may not be easy though, given the inconsistent graph of the former champion this season so far.

Despite a dominating performance in the shorter formats, Karnataka has struggled in the longer version. It has all the ingredients, but has failed to produce any individual brilliant performance.

The team is yet to see a century from one of its batsmen while the bowling has struggled in the absence of injured off-spinner K. Gowtham after the first game. He is back for this match.

“Every batsman wants to score and do something exceptional. It’s just a matter of time and believing in yourself and getting it done once or twice. It’s all about clicking in one game.

“Once that happens, others will also start believing in you and in themselves and you will see things flowing,” Karun said.

The good thing for Karnataka is that the opposition is equally in churn. Railways stunned heavyweight Mumbai to end 2019 on a high but that hasn’t eclipsed the team’s struggles. Captain Karn Sharma has been out for the last two games with a groin strain and will be missing out this one as well.

Seamers Himanshu Sangwan and T. Pradeep have done the bulk of work in bowling but have found little support from the rest barring medium-pacer Amit Mishra. The absence of an effective spinner in the middle sessions has hurt the team.

Former captain Mahesh Rawat is back, which means the team’s top-scorer and wicketkeeper Dinesh Mor may have to sit out.

Playing its penultimate game and currently 11th on the table, Railways’ hopes of making the top-five are, at best, mathematical.

Karnataka, though, is seventh with 17 points and with a game in hand, would like to go home for its last two games on a winning note.

It was deja vu for some of the Indian players as they alighted from the aircraft at the Trivandrum international airport. The wet runway and light drizzle brought back memories of India’s T20I match against New Zealand at the Sports Hub in 2017. The persistent rain on the match day resulted in a truncated contest […]

David Warner and Jonny Bairstow put behind a dismal bowling performance by Sunrisers Hyderabad with their brilliant batting to pull off a five-wicket win over Rajasthan Royals in a Vivo IPL league match at the Rajiv Gandhi Stadium here on Friday night. It is not very often that a superbly-paced century — like the one […]