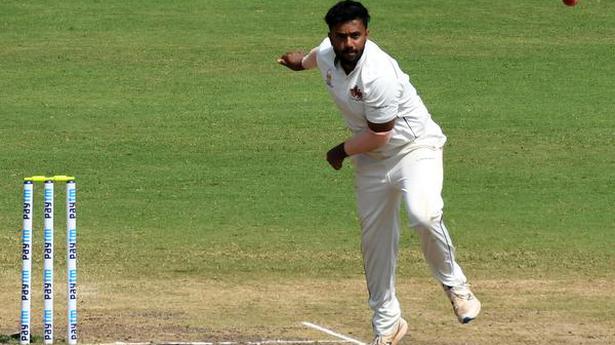 One of the brightest spots in an otherwise inconsistent campaign for Mumbai has been Shams Mulani’s consistent outings. Be it with his left-arm orthodox spin or his crucial fifties lower down the order, the southpaw has been impressive all through this Ranji Trophy season.

Throughout his development from Mumbai’s age-group squads, Mulani has built a reputation of a shrewd cricketer with a never-say-die attitude. While he has translated his ability to see the team through in crunch situations in both departments even at the First Class level, his performances with the ball have helped him shed the “white-ball specialist” tag.

Bowling up front and even at the death in T20s and 50-over games, Mulani had made a name for himself and even represented India at the Emerging Asia Cup in Sri Lanka in December 2018. At the same time, the now 22-year-old had started doubting his own ability with the red-ball with everyone around him stressing he was a white-ball bowler. Mulani revealed that a discussion with Narendra Hirwani, the legendary leg-spinner-turned-coach, helped him change his perspective.

“I was going through that phase and then I went to Sri Lanka with the U-23s (Emerging Asia Cup) and met Hirwani sir over there. He was the bowling coach. I just asked him very casually whether white-ball / red-ball bowlers are different and he said: there’s nothing like that. It’s all in your mind. You just have to tweak a bit, not too much, it’s just in your mind that you bowl better with white-ball,” Mulani revealed at the HPCA stadium on Tuesday.

Having honed his skills at the iconic Shivaji Park Gymkhana under the tutelage of Pravin Amre and Padmakar Shivalkar, Mulani admitted that an additional thrust on spot-bowling has helped him improve his consistency with the ball.

“I try to bowl as much as I can. Spot-bowling is very important, I feel, and I try to do. After the nets, after my batting is done, I catch hold of Pradeep Sundaram (bowling coach) and ask him to set the cones for me and he is ever willing to help me out,” he said. “Purpose is very important rather than going through the drills. Enjoyment is different but you need to be serious where you need to be.”

Basu, who is now the strength and conditioning coach of Royal Challengers Bangalore, said Kohli had the time to be very specific with his meal plans and running intervals at home Source: thehindu.com Related

Former India fast bowler Atul Wassan was on Wednesday appointed as the chairman of the senior selection committee of the DDCA for the 2019-20 season. The other two members on the Delhi and District Cricket Association (DDCA) panel are Anil Bharadwaj and Vineet Jain. The DDCA also formed a three-member junior selection committee which will […]

Dhawan taking it one step at a time

The hunger on Shikhar Dhawan’s face as he plots a return to the India Test team is evident. Having played his last Test, against England at The Oval in September 2018, he is eager for a comeback. Since then, India has played 11 Tests. To emphasise his efforts, Dhawan will join the Delhi team in […]