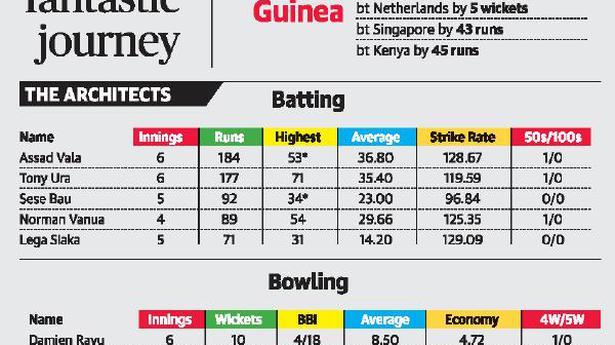 Papua New Guinea (PNG) will make its first-ever appearance at a World Cup after beating Kenya in Dubai on Sunday to book its place at next year’s T20 World Cup.

PNG hammered Kenya by 45 runs at Dubai International Stadium but had to wait for the result of the Netherlands’ game against Scotland before it could celebrate an automatic qualification for the tournament in Australia.

The Dutch beat Scotland by four wickets but failed to knock off the 131 it needed for victory in 12.3 overs which meant that PNG topped the group with a higher net run-rate.

“I am feeling a little emotional,” PNG’s Australian coach Joe Dawes told the ICC. “It’s been a pretty big two years, for them to achieve this is pretty special.”

PNG was facing disaster as it slipped to 19 for six in four overs but Norman Vanua led the recovery, clubbing 54 from 48 balls and sharing a seventh wicket partnership of 77 with Ses Bau.

Kenya needed to reach the target of 118 in 12 overs to have any chance of qualifying for the play-offs but the batsmen were unable to get out of first gear.

Opener Irfan Karim was the only person to hit a boundary and top-scored with 29 as Kenya slid to 73 all out. Nosaina Pokana was the most successful of the PNG bowlers with three for 21.

Ireland also made sure of a place in the finals in Australia courtesy of results elsewhere going in its favour, with Jersey defeating Oman on the final day of group-stage action.

As well as reaching next year’s showpiece, both PNG and Ireland will also progress to the semifinals of the ongoing qualifying tournament, where they play the winners of the two semifinal playoffs.

Bangladesh’s Test cricketers were just a few minutes from being caught up in Friday’s massacre in New Zealand when they arrived at a Christchurch mosque as shooting began, a team spokesman said. In a chilling account, manager Khaled Mashud described how most of the Bangladeshi team drove up to the Masjid al Noor in a […]

Former India skipper Rahul Dravid felt that there was nothing to be alarmed about the outcome of the recent T20I and ODI series against Australia which the host lost 2-0 and 3-2 respectively. During a panel discussion at ESPNCricinfo’s launch of Superstats, in partnership with IIT Madras, Dravid said: “In a way I think it’s […]

Dean Elgar’s courage and application takes us to the heart of Test cricket. The South African opener is tough, fights as if his life depends on the innings. In early 2018, on a volatile surface at the Wanderers, that Bullring, where the ball seamed, bounced off a length, or shot through, Elgar withstood a nasty […]