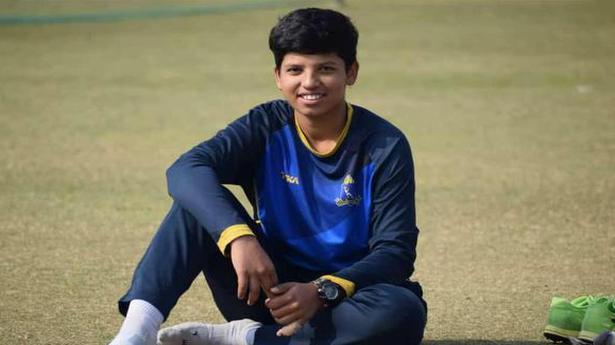 Richa Ghosh is the surprise package in the Indian team for the women’s T20 World Cup. She is also one of the most complete packages.

The 16-year-old can bat, keep wickets and bowl medium-pace. “I know it is unusual for a player to be both a ’keeper and bowler, but I don’t want to stop doing either,” Richa told The Hindu in a chat.

Richa, who hails from Siliguri, said there were occasions when she was both a wicketkeeper and a bowler in the same match. “There have also been tournaments where I had to keep wickets in one match and bowl in the next,” she said. “I know my role is primarily that of a batter. And I like to play aggressively.”

An admirer of Sachin Tendulkar and M.S. Dhoni, she has high respect for Harmanpreet Kaur, India’s captain at the T20 World Cup. “I also like the batting of Shafali Verma who, too, is very young like me,” she said. “It’s great that the team has a few other teenagers in the World Cup team like Jemimah Rodrigues and Radha Yadav.”

With plenty of experience in the form of Harmanpreet, Smriti Mandhana, Deepti Sharma and Poonam Yadav, she feels India — which begins its campaign in the triangular series against England (Australia is the third team) at Canberra on Friday in the build-up to the T20 World Cup — has the team to win the trophy Down Under. “But, of course you never can say what is going to happen in T20s,” she said. “My dream is for India to win the World Cup and to make my own contribution.”

She, however, wasn’t quite expecting to be on the flight to Australia. “Though I had done well at the Challenger Trophy at Cuttack recently, I was shocked when I came to know that I had made it to the team,” said Richa. “Playing for India has always been my goal ever since I became serious about cricket after I was introduced to the sport by my father.”

She used to be the only girl in the local club at Siliguri then. “That has changed,” she said. “Now so many girls are playing cricket. The live telecast of women’s matches and the extensive coverage in newspapers and online have all helped.”

India wrapped up the second T20I in Mohali with the minimum of fuss, producing an efficient batting and bowling performance. South Africa seemed distinctly second-best and the touring side will have to improve significantly if it is to level the series in the third and final T20I at the M. Chinnaswamy Stadium here on Sunday. […]

The choice of left-arm spinner Ravindra Jadeja as India’s sole specialist spinner in the ongoing first Test against the West Indies has left Sourav Ganguly flummoxed. The spinners sitting out are R. Ashwin and Kuldeep Yadav. The ex-India captain said: “I was surprised to see Kuldeep Yadav left out. “If you remember, in Sydney on […]