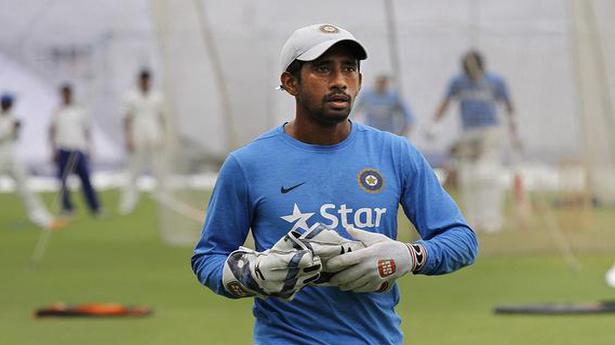 Rishabh Pant’s ascendancy as India’s premier Test wicketkeeper has not made Wriddhiman Saha “insecure” even one bit as he doesn’t believe that he is in competition with the Delhi gloveman.

Saha, one of India’s more technically accomplished keepers, has recently made a comeback for Bengal in the Syed Mushtaq Ali Trophy after being out of competitive cricket owing to shoulder surgery last year.

In the interim, young Pant has made an impression with the bat, scoring Test hundreds in England and Australia.

Had the long lay-off and Pant’s emergence made him insecure?

“Not at all. I was not insecure. Being a sportsman you always run the risk of getting injured.

“The aim was to be fully fit and return stronger,” Saha, who scored 306 runs in 11 Mushtaq Ali Trophy games, told PTI in an interview.

Sceptics have cast doubts that Pant’s batting ability could make a international comeback difficult for the Bengal stumper but Saha remains unfazed.

“I was out with an injury. Rishabh grabbed his chance and scored runs on a consistent basis. Now my aim is to get my form back and make a comeback to the Indian line-up.

“That’s purely my focus and I have stressed before and I want make it clear that there is no competition with Rishabh,” said Saha, who has scored 1164 runs in 32 Tests.

He has been a very safe batsman without being too flamboyant but he does understand that versatility is a pre-requisite at the elite level.

“Nowadays, it’s all about being versatile. Keepers have to bat too,” said Saha.

In fact, his best performances have come whenever he has opened the innings. The normally introvert keeper said he wouldn’t mind opening the innings if the Sunrisers Hyderabad team management gives him that opportunity.

“Of course, I would love to open in the IPL but the decision is up to the team management.

“I have returned after many months. So this IPL has an added significance,” said Saha, who scored a century for Kings XI Punjab in the 2014 IPL final against Kolkata Knight Riders.

The teams batting first had come up trumps here so far this season, but VB Kanchi Veerans altered the script with a convincing seven-wicket win over defending champion Siechem Madurai Panthers in the Sankar Cement-TNPL at the ICL grounds on Sunday. After Veerans’ pacer R. Silambarasan’s impressive spell of five for 17 had restricted Panthers […]

The Proteas are fast sinking in India, but the team has found backing in South African batting great Hashim Amla. “It’s time for rebuilding of the South African team,” said Amla during the Abu Dhabi T10 League draft. When asked if he would reconsider his decision and come out of retirement, given the fact that […]

Former and current cricketers, including India’s Rohit Sharma and Gautam Gambhir, criticised the International Cricket Council’s boundary count rule that decided the World Cup title in England’s favour and denied New Zealand after a pulsating final in London. In a thrilling encounter on Sunday night at the Lord’s, England were adjudged the winners of the […]