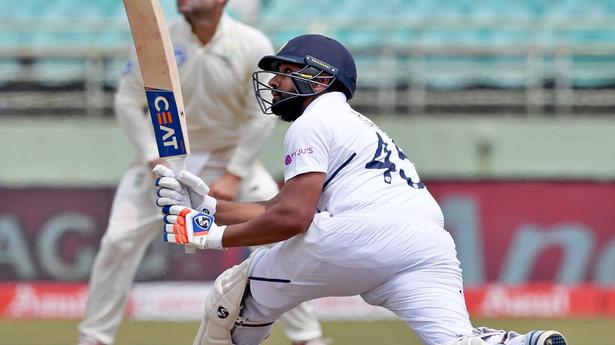 India batsman Rohit Sharma, who became the first player to score a century in each innings of his maiden Test as opener, on Monday jumped to a career-best 17th position in the ICC Test Player Rankings.

Rohit, who now has five centuries from 28 Tests, gained a whopping 36 slots after his knocks of 176 and 127 in the first Test against South Africa in Visakhapatnam helped India win by 203 runs and take a 1-0 lead in the three-match series.

The other opener Mayank Agarwal has also attained a career-best 25th position after his first innings double-century lifted him 38 places.

Captain Virat Kohli, who retained his second spot, has dropped below the 900-point mark for the first time since January 2018. He is now on 899 points, 38 behind top-ranked Steve Smith of Australia.

Among the bowlers, off-spinner Ravichandran Ashwin has made a comeback to the top 10 after his match haul of eight wickets, which included figures of seven for 145 in the first innings.

The formerly top-ranked bowler has moved up four places from 14th position and also into the top five among all-rounders.

Fast bowler Mohammad Shami has reached a career-best 710 points that took him from 18th to 16th, two below his career-best 14th rank, while Ravindra Jadeja has leap-frogged Bangladesh’s Shakib Al Hasan to take second position among all-rounders.

For South Africa, centurions Quinton de Kock and Dean Elgar have progressed. De Kock is back into the top 10 after gaining four places and moving to seventh while Elgar has moved five places and is in 14th position.

India have gained 40 points in the ICC World Test Championship table after the win at Visakhapatnam and are now on 160 points after having won a full 120 points for a 2-0 series win in the West Indies.

New Zealand and Sri Lanka are on 60 points each after their 1-1 series draw while Australia and England are on 56 each with their 2-2 series draw in a five-match series.

The points in the WTC are evenly distributed over the number of matches in a series (two to five), which were decided by the member countries as per their bilateral agreements.

The Board of Control for Cricket in India (BCCI) has decided to wait for the Central Government to spell out the extension of lockdown before announcing the fate of Indian Premier League (IPL). The IPL’s 13th edition has been suspended till April 15. On Monday, the BCCI top brass was scheduled to discuss an indefinite […]

The series initially planned for June was pushed back to July due to COVID-19 Source: thehindu.com Related

Srinivasan has reinvented himself to stay relevant

In the kaleidoscope that cricket is, careers of various hues appear and disappear creating radiant patterns that only last momentarily. In this turbulent world, K. Srinivasan deserves credit for staying relevant by evolving and reinventing himself. A cricketer, a coach and an umpire, Srinivasan, younger brother of all-rounder K. Barathan, has seen it all. Prolific […]