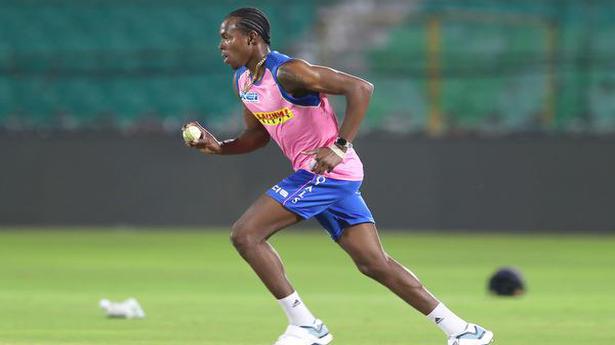 Long before Chris Jordan discovered him and took him along to Sussex and made him an instant star, Jofra Archer was enamoured by the IPL. He wished to play in it, but had no clue how.

He would have settled for less than the ₹7.2 crore that Rajasthan Royals spent on him. But he more than justified his price in his maiden season and is leading his team’s attack this year as well.

The Barbados-born cricketer, who will soon qualify to play for England, is one of the world’s most exciting pace-bowling all-rounders. Excerpts from an exclusive interview the 24-year-old gave to The Hindu:

How IPL is different from other competitions

In other tournaments, half the team is really good. Here anyone in the team can win you matches. Mohammad Nabi and Faf du Plessis are not even playing (regularly).

It is a family, really. Very welcoming. They even welcome my girlfriend.

How tough was the Ashwin-Buttler incident for the team?

That was probably our game to win. Obviously that (R. Ashwin Mankading Buttler) changed the momentum of the game. It was strategic what Ashwin did. Personally, I wouldn’t do that; I would rather lose a game. You are setting an example for kids.

It has happened and gone. It has only made our team stronger.

The other day you picked Jasprit Bumrah, Rashid Khan and yourself as the world’s best T20 bowlers…

That is my opinion, but I don’t know if it has come across as such. Bumrah’s action is a bit awkward, so you don’t see his slower balls. He can trick you with pace. He is a lot quicker than he looks. I faced him last year against Mumbai. I think I didn’t hit the ball, the ball hit my bat.

Rashid Khan was with me at Sussex last year. It is very hard to pick him.

I guess I am pretty much like Bumrah, with my yorkers and slower balls.

Talking of fast yorkers, you like watching videos of Waqar Younis.

Yes, I watched a few of his spells in Tests against England. He was swinging the ball both ways and no one could touch him.

Other bowlers you admire.

The toughest batsman you have bowled to.

One 97 Communications Pvt. Ltd, owners of Paytm, on Wednesday retained the sponsorship rights for BCCI’s International and domestic matches with a winning bid of ₹3.80 crore per match. The Board of Control for Cricket in India (BCCI) on Wednesday announced the deal with the Paytm, which had acquired the rights in 2015 for a […]