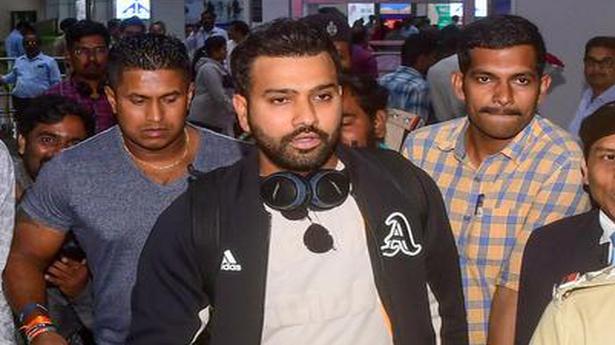 Rain threat persists as the visiting South African team and the Board President’s XI are scheduled to clash in a three-day warm-up game at Dr.PVG Raju Sports Complex here from Thursday.

Rains lashed the town on Wednesday morning but receded by afternoon much to the relief of the District Association officials. “If it doesn’t rain tonight, then there will be a prompt start to the match,” said a senior VDCA official.

With the first Test scheduled at Visakhapatnam from October 2 between South Africa and India, this match assumes significance as it is expected to provide a platform for the fringe players to raise the bar and grab the notice of the national selectors.

And especially to someone like captain Rohit Sharma, who had two forgetful outings in the T20 series against South Africa. The other Test squad member who can be the focus of attention is Mayank Agarwal.

In a way, this is a big match for the players like Priyank Panchal, Abhimanyu Easwaran, Karun Nair and local hero and wicketkeeper-batsman K. Srikar Bharat, who when he last played at this venue scored a century against Hyderabad in the Ranji game.

The 31-year-old Umesh Yadav, who played last in a Test in 2018 and got a lucky break into the Test squad, should grab the chance to get into the groove before the Test.

The case is no different for the likes of pacers Shardul Thakur, Avesh Khan and all-rounder Jalaj Saxena.

On the other hand, this will be the final opportunity for the South Africans du Plessis, vice-captain Temba Bavuma, in-form Quinton de Kock to fine-tune their skills for the longer and challenging format.

New Zealand is the latest country, after the UAE and Sri Lanka, which has offered to host the IPL in case the billion dollar league can’t be held in I Source: thehindu.com Related

It was a Tuesday of slow runs, damp weather and the long wait. Under grim skies that made illuminated floodlights a mandatory accessory to the World Cup semifinal, India tightened the screws on New Zealand. Old Trafford’s dry pitch was on the slower side and the niggardly Men in Blue restricted the Black Caps to […]

Vihari’s ton, Ishant’ fifty guide India to 416 all out

Hanuma Vihari scored his maiden century while Ishant Sharma struck his career’s first fifty as India were bowled out for 416 in their first innings at tea on the second day of the second cricket Test against the West Indies here on Saturday. Vihari made a career-best 111 off 225 balls with the help of […]