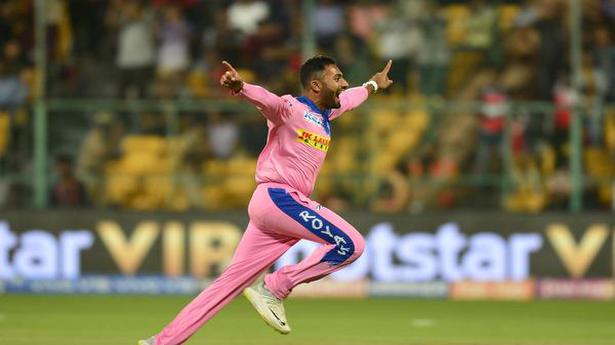 Ahead of Tuesday’s meeting with RCB at the M. Chinnaswamy Stadium, it was pointed out to Shreyas Gopal that he had enjoyed some success against A.B. de Villiers and Virat Kohli. “It would be great to have that again,” he laughed. “But they’re world class players and they’re going to come hard.”

They did go hard at him eventually, but Shreyas wasn’t complaining. The Karnataka leg-spinner dismissed both batsmen in the space of two balls, Kohli picking out long-on and de Villiers slicing to deep cover. A hat-trick would follow, Marcus Stoinis thumping the ball to mid-off.

Shreyas has now accounted for de Villiers four times and Kohli three, in his last four outings against RCB. His display on Tuesday was his latest in a series of fine performances for Rajasthan Royals. With 18 wickets (at an economy rate of 7.4), Shreyas is the second-highest wicket-taker this IPL season (as of the morning of May 1), ahead of leg-spinners of the ilk of Imran Tahir, Yuzvendra Chahal and Rashid Khan.

It is just reward for a bowler who has done consistently well for Karnataka in four-day cricket but had struggled to make a mark in the IPL. After finding opportunities hard to come by at Mumbai Indians, where he managed only two games in his final three seasons, Shreyas has enjoyed himself at Rajasthan Royals, where he moved in 2018.

Royals captain Steve Smith showered praise on Shreyas’s all-round efforts. “He has been terrific for us,” he said. “Every time we have given him the ball, he has done a job for us. He has taken wickets, big wickets mind you. He’s confident in his skill-set and bowling good variations — googlies and sliders and leg-spinners. I think his batting is underrated as well. He has played some very handy cameos that have helped us get over the line on a couple of occasions, and taken some really good catches throughout the tournament. He is a complete package that’s been huge for us this year.”

After the match, Shreyas laughed off talk of Kohli and de Villiers now being worried about facing him. “Honestly, I have a lot more nerves bowling to them than they would ever have batting against me,” he said. “But it feels good to be getting them out.”

The Board of Control for Cricket in lndia (BCCI) is likely to use the pandemic situation to not only try and help smaller cricket nations stay afloat financially but also regain its clout in the International Cricket Council (ICC) politics. The chief executives of the ICC full members are set to discuss the possibility of […]