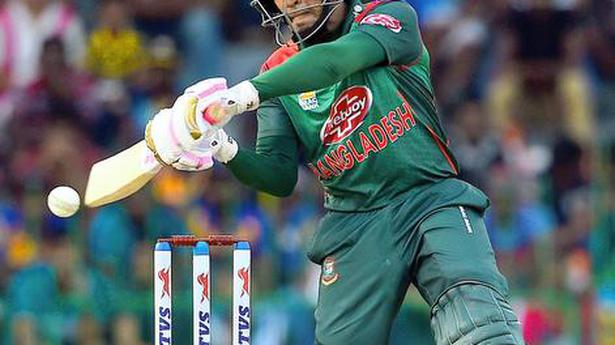 Avishka Fernando’s stroke-filled 82, studded with nine fours and two sixes, took Sri Lanka to a seven-wicket win and an unassailable 2-0 lead in the three-match ODI series here on Sunday.

Chasing a target of 239, the hosts won with 32 deliveries to spare. After Fernando’s assault, Kusal Mendis (41) and Angelo Mathews (52) steered the team home.

Earlier, Mushfiqur Rahim hit an unbeaten 98 to take Bangladesh to a modest 238 for eight.

Mushfiqur slammed six fours and a six in his 110-ball innings to bail out Bangladesh, which lost its first six wickets for 117.

Mushfiqur and No. 8 Mehidy Hasan added 84 for the seventh wicket, a record for Bangladesh against Sri Lanka, to give the visitors’ innings some respectability.

Mehidy made 43 off 46 balls with six boundaries before he was caught by Sri Lankan skipper Dimuth Karunaratne at mid-off off Nuwan Pradeep.

Mushfiqur went off strike in the fifth ball of the final over, missing out on his eighth ODI hundred by just two runs.

Bangladesh, which lost Friday’s opening match by 91 runs, was in trouble soon after skipper Tamim Iqbal elected to bat.

Pradeep trapped opener Soumya Sarkar in front for 11 before Tamim dragged an Udana delivery onto his stump after making 19.

Dananjaya removed Mohammad Mithun for 12 and bowled Mahmudullah for six before Sabbir Rahman’s run out for 11 compounded Bangladesh’s problems.

Mushfiqur began the fightback, in the company of Mehidy, after Udana had Mosaddek Hossain caught by Kusal Perera for 13.

The third and final game of the series will be held here on Wednesday.

Vettori has agreed to work with the Bangladesh spinners up to the ICC T20 World Cup 2020 in Australia.

On the other hand, Langeveldt will join the team as its full-time pace bowling coach.

There is more to Adam Zampa than his six-wicket haul in the Indian Premier League. The Australia leg-break bowler has been one of the most consistent wicket-taking bowlers in white-ball cricket, especially in ODIs. It is reflected in the fact that he dismissed Virat Kohli for the fourth time in 11 innings at the Wankhede […]

Prithvi Shaw flourished yet again as India-A notched up a convincing five-wicket victory over New Zealand-A in the first unofficial ODI here on Wednesday. Shaw smashed 48 off 35 balls to lay the foundation for the visiting team’s chase. Wicketkeeper Sanju Samson blazed away to a 21-ball 39, while Suryakumar Yadav hammered 35 off a […]

Soon after filing his nomination for the post of president of the Board of Control for Cricket in India, Sourav Ganguly described the last three years in the sport’s ruling body as “emergency-like”. The CoA’s overall control was a constant source of irritation, and the members took charge of affairs through the democratic process on […]