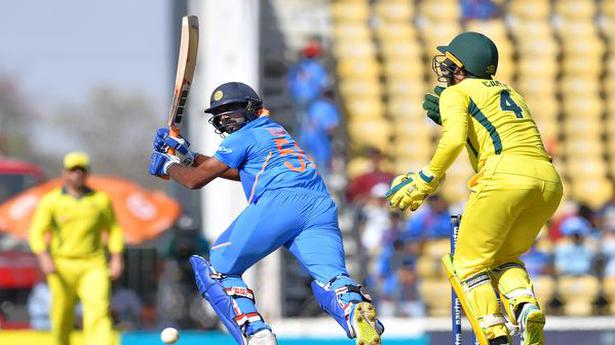 The bond between them is strong. It travels back more than 13 years when Vijay Shankar was an under-15 player.

“He has shown us only 50% of his ability. He can do a lot more damage,” told S. Balaji, his personal coach, to The Hindu here on Wednesday.

The former Railways and Tamil Nadu batsman revealed, “Ahead of the series against Australia, we had specific training in preparation against the type of bowlers he would face.”

He added, “For instance, for Jason Behrendorff’s left-arm over-the-wicket-angle, Vijay Shankar practised with a guard just outside his leg-stump, rather than a middle-and-leg one. His backfoot moved towards middle stump and he was in a position to play that angle with a lot more freedom.”

Balaji said the focus here was on a tighter backlift. “We were aware that the yorkers would come and Vijay Shankar had a shorter backlift and generated power with his wrists.”

He added, “We knew Marcus Stoinis often sent down three to four off-spinners in an over and Vijay Shankar prepared accordingly.”

Plenty of thought has gone behind Vijay Shankar’s practice methods. Balaji said, “He bats with a steel rod with a grip, with the same length and weight of a bat. And the idea is to middle the ball, avoid edges.”

Balaji said, “Then we use the middler bat which is like a normal bat but with only half the width. This makes batting with the regular bat easier.”

The coach said, “Vijay Shankar’s advantage is that he is very balanced and has a top-hand grip that gives him a lot of fluency.”

Balaji is someone who emphasises on footwork. “Vijay Shankar often faces upto 500 deliveries without a break in the nice indoor facility he has in his house and has to use his feet and come forward to at least 300 of them.”

Backfoot play is vital too and here importance is given to throwdowns on artificial turf with a synthetic ball from 10 yards. “He is sound off his backfoot. You could see that from the way Vijay Shankar played the short stuff from Pat Cummins.”

And Balaji was the one who convinced Vijay Shankar to switch to pace from off-spin. “He is now bowling with a shorter run-up which is good.

“I want him to use his shoulder and wrist more. Against Australia, he was rightly focusing on bowling fuller and straighter in the last over.”

When Vijay Shankar nailed it in Nagpur, his coach was delighted.

He is currently mentoring Victoria’s Under-19 prospects online via Zoom. Source: thehindu.com Related

Captain Manish Pandey and Shivam Dube produced power-packed knocks to pave the way for India A’s four-wicket win over South Africa A in the third unofficial ODI here on Monday, giving the hosts an unassailable 3-0 lead in the five-match series. Dube smashed an unbeaten 45 off 28 balls while Pandey plundered 81 off 59 […]