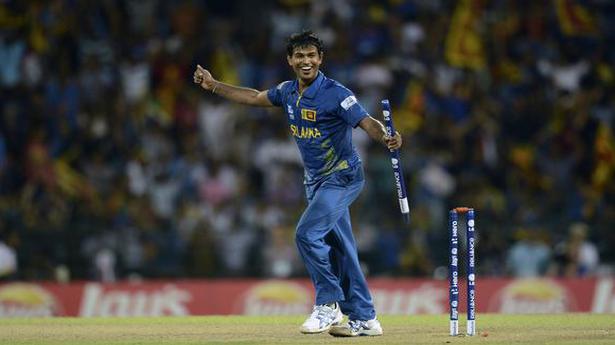 Sri Lanka seamer Nuwan Kulasekara has decided to call time on his international career, finishing as the third highest wicket-taker among his country’s pace bowlers after Chaminda Vaas and Lasith Malinga.

For Indian fans, their biggest connect with Kulasekara would be Mahendra Singh Dhoni hitting him for the Wold Cup-winning six at the Wankhede Stadium in 2011.

Kulasekara last represented Sri Lanka in an ODI against Zimbabwe in Hambantota in July 2017 and hasn’t played any competitive match since March 2018.

Kulasekara was one of Sri Lanka’s heroes during their victorious 2014 World T20 campaign in which he took eight wickets in six matches at an economy rate of 6.42.

In the final against India in Dhaka, Kulasekara had figures of 1 for 29 with Yuvraj Singh failing to go big against him.

Kulasekara was ranked as the No.1 bowler in March 2009 ICC rankings and his career-best ODI figures of 5 for 22 came in 2013 against Australia in Brisbane.

Sri Lanka’s depleted national cricket squad left for Pakistan on Tuesday expressing confidence in security promises by the host despite reports that the team could be targeted by militants. The Sri Lanka team were attacked in Lahore in 2009. Since then most international teams have refused to tour the South Asian country, leaving Pakistan to […]

Eventually, it turned out to be a smooth ride to the finish-line for the Kolkata Knight Riders. Needing a victory to stay alive in the race for the last available playoff-berth, KKR chased down the target of 184 set by Kings XI Punjab with seven wickets and two overs to spare. The defeat dashed Kings’ […]

WI vs IND: I am flexible batting at any position, says Shreyas Iyer

Shreyas Iyer says he is “flexible” batting at any position as the Indian team management continues its search for a reliable number four batsman. Iyer, who is part of the team touring the Caribbean islands, could be in competition with the likes of K L Rahul and Rishabh Pant over the next two ODIs against […]