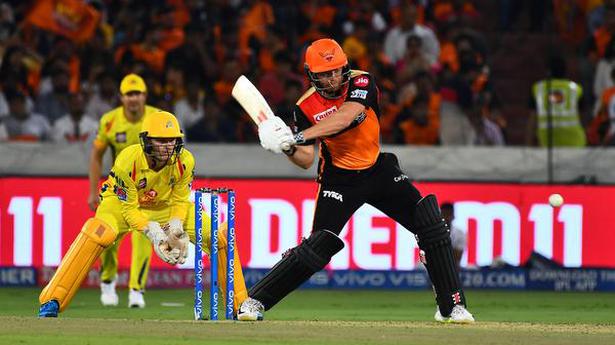 For any opposition, the sight of the inspirational M.S. Dhoni, laid low by a back spasm, watching his team from the pavilion is a big motivating factor.

Sunrisers Hyderabad seized on the huge opportunity to rediscover its winning ways with an emphatic, six-wicket victory over table-topper Chennai Super Kings at the Rajiv Gandhi Stadium here on Wednesday night.

The in-form David Warner and Jonny Bairstow served another reminder as to why they are the most feared opening pair in this IPL by putting on 50 runs in just 4.3 overs, with the former being more dominant while chasing a modest target.

The host pulled off a much-needed win despite losing Warner after a rollicking half-century (25b, 10×4) in the sixth over (his fifth this season besides one century) to Deepak Chahar, captain Kane Williamson and all-rounder Vijay Shankar to leggie Imran Tahir, the only bowler to make some impact.

Bairstow, with his second half-century of the season to go along with a ton, helped the team stay in the race for a slot in the qualifiers with an unbeaten 61 (44b, 3×4, 3×6).

Earlier, Super Kings, electing to bat, frittered away a confident start from Faf du Plessis and Shane Watson and in the second-half clearly felt the absence of Dhoni — out of the game with a back spasm.

The decision to bat was not surprising but it was a dismal performance from the champion in the face of some accurate, if not hostile, bowling from Sunrisers.

Just when it looked Watson was going to take charge, he was done in by left-arm spinner Shahbaz Nadeem, missing a cut to be bowled, in the 10th over. In the next over and in his first, medium-pacer Vijay Shankar struck another big blow forcing du Plessis to cut a ball which had extra bounce to wicketkeeper Bairstow.

Leg-spinner Rashid Khan, who has had a quiet season so far, struck a double blow in the 14th over as he earned leg-before decisions against an out-of-sorts captain Suresh Raina and Kedar Jadhav which effectively pushed Super Kings on to the backfoot.

It was a sorry batting display with only 52 coming in the last 10 overs for the loss of four wickets, with Ambati Rayudu and Ravindra Jadeja never really get going.

SRH won by six wickets with 19 balls to spare.

Indore all set for inter-State carnival

The stage is set for the concluding part of the inter-State Twenty20 carnival here from Friday before glittering IPL extravaganza begins in Chennai in about two weeks. Ten teams will compete for the Syed Mushtaq Ali Trophy, the last of the current season’s BCCI’s senior men’s tournaments. An action-packed five days, with four matches scheduled […]

Fight against COVID-19 is mother of all World Cups: Shastri

India’s head cricket coach Ravi Shastri on Wednesday described the country’s fight against the COVID-19 pandemic as the “mother of all world cups”. The coronavirus outbreak has so far claimed over 350 lives and infected more than 11,000 people in India, forcing the government to extend a 21-day lockdown to May 3 to contain the […]