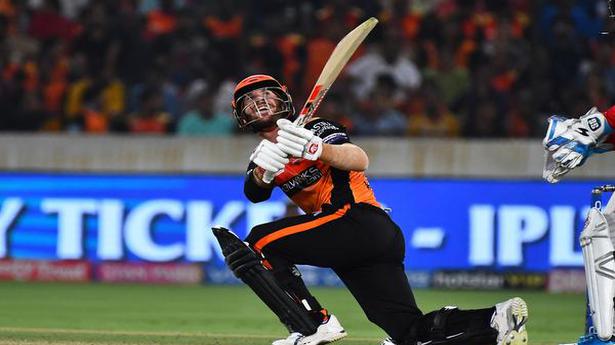 David Warner’s pre-match wish to see his fans go back home with a smile in his last match this season was fulfilled as his continued brilliance with the bat and a disciplined bowling effort helped Sunrisers Hyderabad score an impressive, 45-run win over Kings XI Punjab, and stay in the hunt for a slot in the playoffs, at the Rajiv Gandhi Stadium here on Monday.

Left-arm pacer Khaleel Ahmed struck two big blows — sending back Chris Gayle cheaply as the batsman slogged one straight to a fielder in the deep and removing the dangerous-looking Nicholas Pooran, caught brilliantly by Bhuvneshwar Kumar near the long-leg fence of an attempted hook — to reduce KXIP to 95 for three in 11th over.

It was another huge opportunity for the big-hitting David Miller to come good but he again failed, pulling leggie Rashid Khan straight to the fielder in the deep, even as K.L. Rahul turned out to be the lone ranger with a wide range of strokes.

In the same 13th over, skipper R. Ashwin also found the fielder playing a lofted shot which effectively pushed KXIP out of the contest. The Afghan spinner finished with an impressive three-wicket haul.

Earlier, Ashwin’s decision to ask Sunrisers to take first strike, on a beautiful batting wicket, backfired. The explosive David Warner and Wriddhiman Saha launched a stunning onslaught to score the highest number of runs in PowerPlay this season — 77 for no loss — bettering the team’s 72 against Kolkata Knight Riders at the same venue.

The openers treated left-arm pacer Arshdeep Singh and off-spinner Mujeeb-ur-Rahman with disdain when they either bowled short or wide.

To the delight of Punjab camp, it was leg-spinner M. Ashwin, who struck in his first, and the seventh over of the innings, to send back Saha.

But, Warner continued to bat as well as he has done right through this season — hitting his eighth fifty in 12 games (besides a century).

Mujeeb conceded 26 runs in his fourth over — with Kane Williamson hitting one six and Mohammad Nabi two — as he finished with the most expensive spell in this IPL (66/0) even as Sunrisers scored 109 runs in the last 10 overs.

Always strived to be the best and raise the bar, says Gautam Gambhir

Gautam Gambhir said on Wednesday that he “doesn’t see anything wrong” in Paddy Upton’s assessment of his insecurities, but asserted that he was not a vulnerable man, citing the 97 he made in the 2011 World Cup final against Sri Lanka in Mumbai to prove his point. In his new book The Barefoot Coach, India’s […]