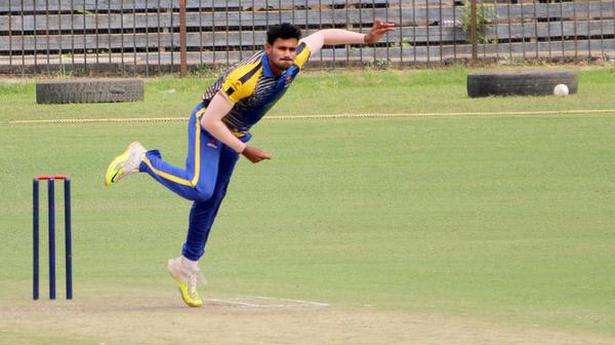 Captains who make bold moves are often rewarded and, on Sunday afternoon, Vidarbha skipper Ganesh Satish, defending a modest total of 143, was called upon to make a tactical move on a dry surface in a Group B Super League match of the Syed Mushtaq Ali Trophy T20 tournament at the scenic Emerald Heights international School ground.

The Vidarbha spinners had completed their quota of overs and, perforce, Satish had to make a choice between left-arm seamer Shrikant Wagh and India spearhead Umesh Yadav. He chose Wagh ahead of Umesh in the crucial 17th over when Uttar Pradesh needed 37.

Satish’s decision clicked as Vidarbha scored a 10-run win against Uttar Pradesh and now looks forward to take on Mumbai in another important league match at the Holkar Stadium on Monday.

Playing his second match for Vidarbha, Umesh lifted a massive six over wide long-on in the 20th over to help his side’s score swell to 143 in 20 overs. But operating the first over with the new ball, he conceded 16 runs to Uttar Pradesh opener Upendra Yadav who struck two fours and one six. This, perhaps, weighed in Satish’s mind when his side had completed 16 overs and when Uttar Pradesh was in with a chance to pull off a win with opener Samarth Singh in the middle.

Not a regular in the Vidarbha Ranji team — he has played a match each in the last two seasons against Chattisgarh and Karnataka — Wagh, after being hit for six off the first ball of the 19th over, responded to his captain’s call by dismissing Samarth caught at deep-cover and Ankit Choudhary on the on-side.

The fall of two wickets put the match beyond Uttar Pradesh which needed 15 runs off the last over that was sent down by Umesh with control.

“We scored 27 runs in the last two overs, that’s why we won the match. We also chose a third spinner Ravi Jangid after seeing the previous match between Karnataka and Delhi,” said Vidarbha coach Chandrakant Pandit.

Vidarbha has two wins in two matches, but it will have to put it across Mumbai and Karnataka in the last Group B league in order to reach the final.

On Sunday (June 16), one cricket team will take on another at the group stage of the World Cup in England. The teams on Sunday won’t be playing for the trophy. The losing team on Sunday might even end up winning it. But that’s not how an India versus Pakistan match is viewed. The shared […]

Pujara, Jadeja and Smriti among five players to get NADA notice

Fit and healthy Kapil Dev happy to be practising golf

It is beautiful to be back, having fun and playing with friends, says the cricket legend Two weeks after undergoing an angioplasty, World Cup-winning former India captain Kapil Dev was back to playing golf, a sport he took up passionately after bidding adieu to cricket. The 61-year-old had said that he would like to get […]