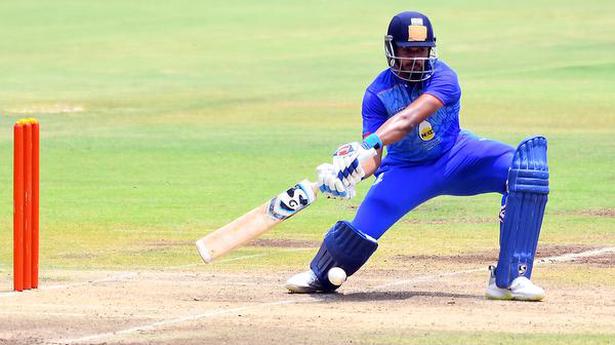 Shreyas Iyer scored an unbeaten half-century (53 n.o., 47b, 5×4, 1×6) and led his team to a convincing eight-wicket win against Delhi in a Group B Super League match of the Syed Mushtaq Ali Trophy at the Emerald Heights International School ground here on Saturday.

Once Delhi capitulated to Tushar Deshpande’s incisive second spell, it was hard-pressed to post a challenging total.

With two losses in as many matches, the last year’s winner, Delhi, has virtually ruled itself out of a place in the final, especially with Karnataka picking up four more points with a 10-run win against Uttar Pradesh at the Holkar Stadium. It was Karnataka’s ninth straight win in the tournament.

Under immense pressure to repel the Karnataka seam and spin attack in the opening league match on Friday, Shreyas had fallen prey to seamer Manoj Bhandage, but in the second match, the Mumbai captain chose the safe option with his team in pursuit of a target of 145.

The arrival of senior professional in Suryakumar Yadav after the downfall of opener Jay Bista perked up the run rate, and in the end, Shreyas hit the match-winning boundary and brought cheer to his teammates.

Shreyas and Mumbai took the bold decision to effect three changes from the side that went down to Karnataka. It brought in Bista, Eknath Kerkar and Royston Dias for Siddesh Lad, Aditya Tare and Dhawal Kulkarni.

Bista, who was picked in the squad for the injured Ajinkya Rahane, played his part. After Prithvi Shaw chipped a straightforward catch to mid-on fielder Lalit Yadav off Navdeep Saini, Bista helped Shreyas add 57 for the second wicket in a cautious manner.

After Bista’s departure, Suryakumar looked for the big shots, hit Saini for two sixes — over mid-wicket and straight — and made a 26-ball 42. He also raised an unbeaten partnership of 76 for the third wicket. Eventually Mumbai won with six balls remaining.

In the first match at Emerald Heights, Maharashtra scored a seven-wicket win against Bengal with Rahul Tripathi scoring a half-century.

Vaidehi Ankolekar, a BEST (The Brihanmumbai Electric Supply & Transport) conductor here, was busy with his duties in a municipal bus on Saturday morning; but was also constantly checking her phone for updates on the Under-19 Asia Cup final in Colombo. The moment India was bowled out for a meagre 106, she sought permission from […]