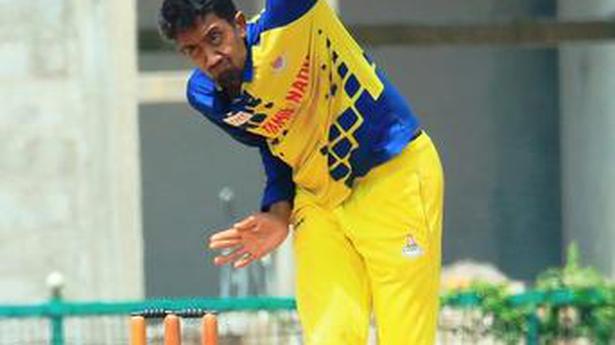 Tamil Nadu easily defended a moderate target against Rajasthan to notch up its second consecutive win in Group-B of the Syed Mushtaq Ali Trophy cricket tournament here on Saturday.

Left-arm spinner Sai Kishore (three for 19), opening the bowling, scuppered Rajasthan’s chase by picking up wickets in each of his first three overs. By the time Sai Kishore finished his first spell, the writing was on the wall for Rajasthan.

Chasing 156 for a win, Rajasthan managed just 116 for eight with captain Mahipal Lomror (32) providing the token resistance in an innings in which only four batsmen reached double figures.

Tamil Nadu bowlers smartly varied their pace and line on a slow track to deprive scoring opportunities to the Rajasthan batsmen.

Sai Kishore lured the top-order batsman to attack him, but their intended slogs only ended in catches in the deep where M. Mohammed took two of them.

The regular loss of wickets meant the Rajasthan innings never gathered the required momentum and it was all over when Lomror holed out to Shahrukh Khan off T. Natarajan.

Earlier, the Tamil Nadu openers M. Vijay and N. Jagadeesan were kept on a tight leash by the three left-arm medium-pacers — Tanveer Haq, Aniket Choudhary and Akash Singh — though the pair added 54. Vijay (35) played more fluently than his partner and was the enforcer until he perished, trying to go over the top off Akash.

Unlike against Kerala, there was no late flourish as Tamil Nadu ended up with a moderate score but it proved to be more than enough.

Moeen Ali is in a cheery mood a day before he plays his final game of the season for Royal Challengers Bangalore. The numbers may not tell the full story but this has been a good IPL campaign for him: a fifty and two for 18 in Mumbai, a 28-ball-66 and a nerveless final over […]

Pakistan cricket squad set to leave for England on June 28

The team will be quarantined in Derbyshire for 14 days, under restrictions in place for the coronavirus pandemic, but will be allowed to practice during that period Source: thehindu.com Related

Saqlain Mushtaq and Anil Kumble were locked in a fierce rivalry on the pitch, but were friends off it. In an Instagram live chat with Sportstar on Sunday, the Pakistan legend revealed how the Indian spin king helped him immensely in his career. “We were in England and I told Anil bhai that there were […]