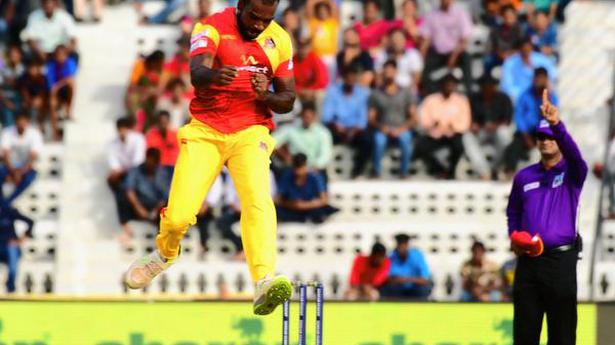 The teams batting first had come up trumps here so far this season, but VB Kanchi Veerans altered the script with a convincing seven-wicket win over defending champion Siechem Madurai Panthers in the Sankar Cement-TNPL at the ICL grounds on Sunday.

Pacer R. Suthesh got into the act immediately, creating doubts in the minds of the Panthers’ openers — Karthick and A. Sarath Raj — and went on to deliver a maiden, the first instance in TNPL-2019 when no run was scored in the opening over.

Gowtham Thamarai Kannan, the other fast bowler, made it even better for Veerans, removing the in-form Karthick in the next over.

The latter, trying to cut, offered a dolly to Silambarasan at short third-man.

Panthers would have been in bigger trouble had speedster R. Sathish and left-arm spinner N.S. Harish grabbed on to caught and bowled chances from Shijit, when on 13 and 18.

Fortunately for Veerans, Sathish struck immediately, forcing Sarath to drive uppishly and into the safe hands of B. Aparajith at cover.

J. Kousik, who joined Shijit, repaired the damage with a 40-run partnership for the third wicket.

Aparajith handed over the ball to Silambarasan at this stage and the 26-year-old from Cuddalore delivered in style. Bowling a steady line, he ripped through the Panthers’ line-up and finished with his first five-for of the season.

Chasing a target of 139, Veerans lost two wickets quickly before Aparajith and Lokeshwar put the side back on the rails with their calm approach. Their efforts took the team past the finish line with an over to spare.

Chasing a modest total of 115, the Gillies openers gave the team a scorching start, stitching together a 106-run stand. It was the duo’s second successive century partnership and it came off just 72 balls.

Jofra Archer removed Australia opener Marcus Harris to leave Australia on 12-1 at lunch as rained hampered the start of the third Ashes test at Headingley on Thursday. Play got under way late in damp conditions in West Yorkshire, with Stuart Broad and Archer bowling well, Broad almost tempting David Warner into edging the ball […]

In Himachal Pradesh’s fine start to the 2019-20 Ranji Trophy, Rishi Dhawan’s has been a stellar role. The 28-year-old all-rounder has already accumulated 187 runs, including two half-centuries, and picked up 13 wickets as Himachal, in back-to-back away matches, has felled mighty Tamil Nadu and secured the first-innings lead versus Karnataka. “It’s a good performance,” […]

The immensely talented Shreyas Iyer enhanced his reputation as a finisher with a scintillating 29-ball-58 in India’s six-wicket victory over New Zealand in a high-scoring first T20 International here on Friday. Iyer built on KL Rahul’s (56 off 27 balls) blazing start and Virat Kohli’s useful 45 off 32 balls as India made short work […]