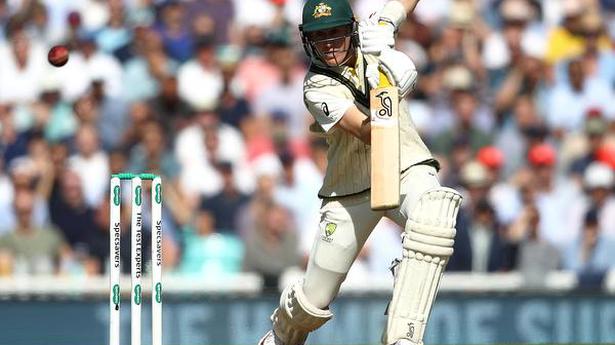 The tourists had reached 55-2 by lunch, with Steve Smith unbeaten on 14 and Marcus Labuschagne not out 32.

Earlier, England added just 23 runs to their overnight score at the sun-soaked Oval in London, dismissed for 294 on a good-looking pitch.

Jos Buttler, who counter-attacked impressively on Thursday, was bowled by Pat Cummins for 70 and Jack Leach was the last man out for 21.

Mitchell Marsh’s dismissal of Leach gave him figures of 5-46 on his return to the Test side while Cummins took 3-84.

Tim Paine’s Australia will fancy their chances of building a substantial first-innings lead as they seek their first series win in England since 2001.

But they were dealt a big blow when Warner was out in just the second over, caught by wicketkeeper Jonny Bairstow off Archer for five.

Warner was initially given not out but England reviewed.

Slow-motion replays suggested there was a gap between bat and ball but the technology picked up a snick and the umpire overturned his initial verdict.

It was the eighth time the opener, who returned to Test cricket last month following a ball-tampering ban, had been dismissed in single figures in the five-Test series.

Archer then struck again with a 90 miles-per-hour thunderbolt to reduce Australia to 14-2 when Ben Stokes held onto a sharp chance from Warner’s fellow opener Marcus Harris at second slip.

Harris’s dismissal brought Smith to the crease and he was immediately greeted with a sharp bouncer, much to the delight of the packed crowd.

Smith came into the match with 671 runs under his belt in just five innings at an astonishing average of more than 134.

England, desperate to level the series at 2-2, have struggled to find consistency and contributed to their own downfall in their first innings.

Australia won at Old Trafford last week to take a 2-1 lead in the series, meaning they will retain the Ashes urn regardless of the result at the Oval.

R. Ashwin produced a fighting effort with the bat for Tamil Nadu (79, 206b, 5×4, 2×6) to deny Mumbai a shot at forcing an outright win but could not prevent the visitors from taking the first-innings lead on the final day of play of their Ranji Trophy match here at the M.A. Chidambaram Stadium on […]

Starc said he is looking forward to playing a day-night Test in the home series against India. Source: thehindu.com Related

New wine in old battles, as money makes the game go round

The two key words in cricket in recent years have been “context” and “reform”, the latter for off-field activities and the former for the on-field. These have led to the establishment of the World Test Championship, and to changes in the way the International Cricket Council as well as the Board of Control for Cricket […]