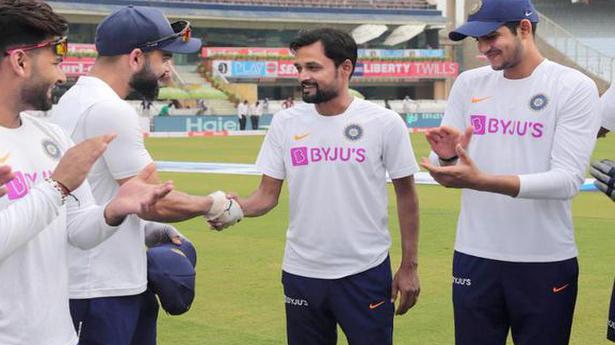 Three days ago, Shahbaz Nadeem was at the Alur grounds just outside Bengaluru, turning out for Jharkhand in the Vijay Hazare Trophy. On Saturday, he became India’s 296th Test cricketer, incredibly handed a debut on his home ground.

Nadeem was added to the squad late on Friday, after Kuldeep Yadav complained of pain in the left shoulder. In the morning, India duly went with a third spinner, dropping Ishant Sharma, and Nadeem got his chance.

Fortune may have played a part but it is no less, it might be argued, than Nadeem has deserved.

It is not easy for a spinner, of course, to find a place in a side with R. Ashwin and Ravindra Jadeja in it. Kuldeep Yadav’s emergence in 2017 must have further dented Nadeem’s hopes of ever playing for the country.

But on Saturday, it was Kuldeep’s turn to watch from the sidelines as Kohli handed Nadeem his cap. The two spinners later embraced warmly.

“If the door doesn’t open, I will break it open,” Nadeem had told The Hindu three years ago. “I am right now knocking. Next time I will break it.” The door has finally opened; this is his opportunity.

New Zealand’s 100th Test win, driven typically by team spirit, fittingly arrived at the the Basin Reserve, the soul of the country’s cricket really. And the feat, an emphatic 10-wicket win against fancied India, arrived in the 100th Test of one of New Zealand’s favourite cricketing sons, Ross Taylor. The icing on the cake really. […]