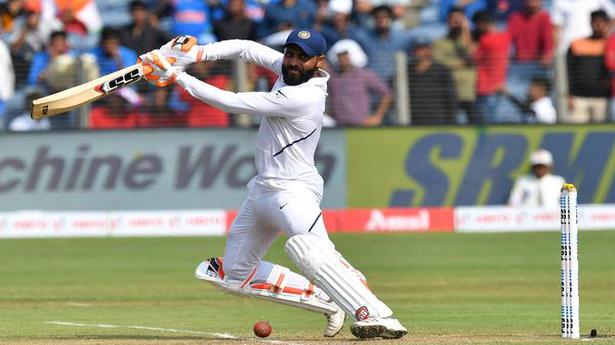 In the World-conquering under-19 squad of India, one was the captain, and the other was his deputy. More than a decade down the line, the flamboyant Kohli has evolved into India’s most successful Test captain, while Ravindra Jadeja has emerged as a reliable allrounder across formats.

It was fitting that when Kohli eclipsed a plethora of record to become the first Indian to score seven double hundreds here at the Maharashtra Cricket Association Stadium on a frantic Friday, Jadeja complemented him from the other end as the duo shut the doors on South Africa with a whirlwind 225-run partnership off just 237 balls.

With the duo among the fittest cricketers, it didn’t come as a surprise that their running between the wickets was outstanding, with Kohli converting twos into threes the moment Jadeja joined him in the middle.

When Jadeja replaced vice-captain Ajinkya Rahane at the crease, Kohli was at his breezy best. While his captain was on a rampage, scoring 90 runs off 103 balls in the second session, Jadeja played the second fiddle to perfection, accumulating just 25 runs off 59 balls.

It was also imperative for Jadeja to showcase his ability to bat responsibly, having been promoted to No. 6 with India preferring five specialist batters for the game.

It was a different tale after tea. Jadeja amassed 66 runs off 45 balls and matched his captain stroke for stroke. No wonder then that the onslaught after the break brought 128 runs in just 15 overs before Jadeja’s dismissal and the Indian declaration.

Despite their association going all the way back to their junior days, Jadeja appeared to have lost the faith of his captain a couple of years ago, especially in the shorter formats. Having clawed his way back into the blues, the Jamnagar jammer also seems to have earned enough confidence of the team management to bat at No. 6.

If the Indian think-tank persists with him at the batting position, especially while playing at home, Friday could well be the first of many more partnerships between by Kohli and Jadeja.

Kohli grooves to Caribbean tunes during washed out ODI

While the first ODI between India and West Indies ended on a dull note as it got abandoned due to persistent rain, cricket fans in Guyana were provided with some moments by skipper Virat Kohli which they must have cherished. Only 13 overs could be bowled before the first ODI of the three—match rubber was […]

Hamish Bennett has been recalled to New Zealand’s squad for the first time in almost three years for the five-match Twenty20 series against India due to injuries to Trent Boult, Matt Henry and Lockie Ferguson. The 32-year-old Bennett has not played for New Zealand since a one-day international against Bangladesh in 2017. He has yet […]