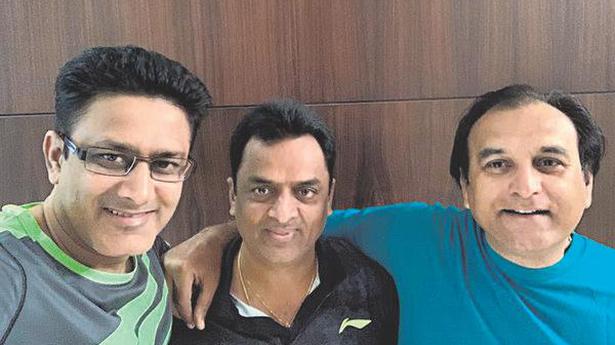 It was a belated silver jubilee reunion for Anil Kumble, Venkatapathy Raju and Rajesh Chauhan last week. They met in Mumbai when Chauhan dropped in to meet his former spin-mates busy with commentary assignments.

“It was a pleasant surprise. We had a good time re-living our exploits,” said Kumble, the leader of the trio which came together for the first time in the 1993 Kolkata Test against England.

“Anil was our captain. He would decide the plan of action. Raju and I gave him support from the other end because Anil was the match-winner,” recalled Chauhan, who finished with 47 wickets from 21 Tests. Kumble’s haul was 619 wickets from 132 Tests.

For Raju, who finished with 93 wickets in 28 Tests, the approach was simple.

“I was the senior but Anil was the guide. He was the strike bowler and our job was to strengthen the process of winning the match. We had the backing of the captain (Mohammad Azharuddin) who always gave us the field we asked for,” he said.

Kumble, Raju and Chauhan were critical to India winning the 1993 Test series 3-0.

The team had returned from a disappointing tour of South Africa and Azharuddin was under pressure to retain his captaincy.

He responded with a breathtaking 182 and never looked back.

Ajit Wadekar, as cricket manager, had looked to India’s strength in spin bowling and the trio of Chauhan, Raju and Kumble, who figured in 14 Tests together, did not let him down.

“We complemented each other. Raju and I would dry up runs at our end and Anil would explore angles to make dents. Anil was a champion in reading the situation and pitch. We were also helped by Manoj Prabhakar, who was a wily bowler,” remembered Chauhan, who played his final Test also at the Eden Gardens.

“We loved each other’s success. There was no competition amongst us,” said Raju, quite similar to the days when Bedi, Prasanna, Chandra and Venkatraghavan routed the opposition with some splendid teamwork.

The re-union was “fun” as Kumble noted.

They parted with a pleasant reminder from Chauhan, “India never lost a Test I played in.”

Ranji Trophy | Vijay Shankar — as tough as they come

Vijay Shankar has seen freak injuries trouble him regularly, but has battled them all with courage, grit and determination. It probably is this remarkable ability to never give up that has made the selectors hand over the captain’s armband to him this Ranji season. “At times, I have [wondered] why God is so harsh on […]

India’s pace spearhead Jasprit Bumrah is expected to be the BCCI nomination for the prestigious Arjuna award this year after missing out on seniority Source: thehindu.com Related

The Board of Control for Cricket in India (BCCI) chief Sourav Ganguly and secretary Jay Shah visited the new Sardar Patel Stadium in Ahmedabad on Tuesday. During his two-hour visit to the stadium — set to be the world’s largest stadium with a capacity to host 1.10 lakh fans — Ganguly took a stock of […]