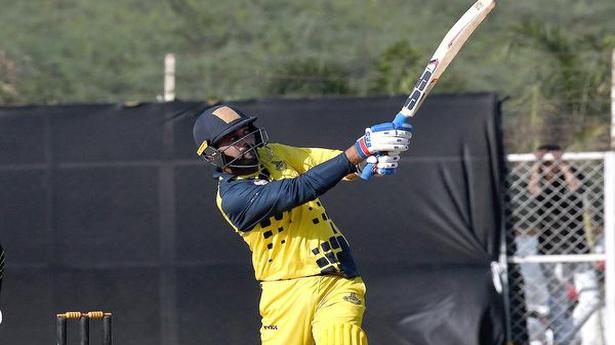 The surge in the run-rate arrived rather late in the day. Tamil Nadu was left with too much to accomplish in the end. It was mission impossible even against a lightweight.

Riding on a century of some bright strokeplay from the in-form M. Vijay, Tamil Nadu crushed Meghalaya by 92 runs in the Syed Mushtaq Ali Twenty20 tournament at the Lalbhai Stadium on Saturday.

Yet, following Vidarbha’s victory over Gujarat earlier in the day, Tamil Nadu needed to defeat Meghalaya by 197 runs to qualify as one of the two teams from Group-B for the next phase.

Vidarbha topped the group with five wins and 20 points along with Gujarat with 16 and a NRR of 1.28.

Losing out on run-rate

Tamil Nadu lost out on run-rate, finishing fourth, after Himachal Pradesh, with 16 points at 0.397.

Coach Hrishikesh Kanitkar said “We did not play the key moments of the tournament well. There were occasions when we allowed partnerships to build. We need to combine better as a team.”

Vijay was elegant and cultured with his strokes in a format where brute force is often seen. The right-hander dissected the Meghalaya attack, stroking the ball through the gaps and clearing the field effortlessly, whether easing the ball over the cover fence or flicking it beyond the mid-wicket ropes. In the end overs, the big-hitting R. Vivek thumped the Meghalaya attack with a 14-ball unbeaten 36 (4×4, 2×6).

Never in the hunt

Meghalaya was never in the hunt and was just content to bat through the overs.

There were some runs for skipper Puneet Bisht (27) and Gurinder Singh (38 not out, 30b, 5×4). Leggie Murugan Ashwin was among the wickets.

Eventually, this was not enough to see Tamil Nadu through.

“It feels like a dream,” said G. Periyaswamy on his selection in the Tamil Nadu side. His is an incredible story. Periyaswamy was just two when he lost complete vision in his right eye following a bout of small pox. As he grew up in Salem — he battled poverty as well — Periyasamy found […]

Australia looked on course to chase down a small target in their first T20 International against Pakistan before the game was called off due to rain on Sunday. Put into bat, Pakistan were 88 for three wickets in the 13th over when rain interrupted play. The match was subsequently reduced to 15-overs-a-side when the players […]

Sri Lanka seamer Nuwan Kulasekara has decided to call time on his international career, finishing as the third highest wicket-taker among his country’s pace bowlers after Chaminda Vaas and Lasith Malinga. For Indian fans, their biggest connect with Kulasekara would be Mahendra Singh Dhoni hitting him for the Wold Cup-winning six at the Wankhede Stadium […]