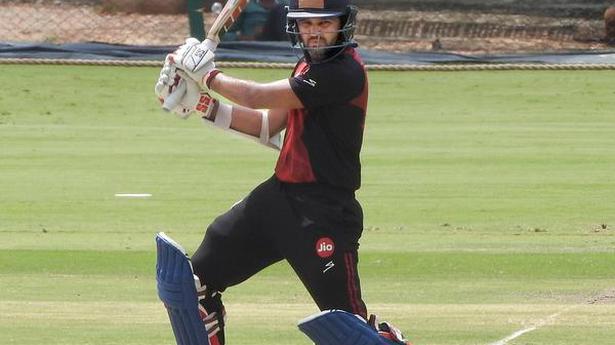 Chasing 225, Gujarat was home and dry with more than 11 overs to spare.

On a slightly two-paced wicket, skipper Parthiv started with a slashed four over the slip cordon off speedster Subodh Bhati.

But once he had his eye in, there were a delightful array of shots.

He scored as many as eight 4s in his first 50 runs, with Bhati and fellow paceman Simarjeet Singh repeatedly pulled and driven.

At the other end, Panchal was watchful but quick to pounce on the bad deliveries. A crisp drive to the cover fence got him going before he came up with two delightful flicks to the mid-wicket boundary.

Simarjeet did induce a false stroke when Panchal was on 28, but Nitish Rana dropped a sitter at mid-on.

It was a pity that neither went on to make a century; Parthiv caught at short mid-wicket after he failed to keep a flick down, while Panchal picked the third-man fielder following a lazy shot.

Earlier, Chintan Gaja proved Parthiv’s decision to bowl first right by claiming both Delhi openers with just 17 on board. Shikhar Dhawan was sent back for nought, as he failed to clear mid-off after advancing down the pitch.

Dhruv Shorey and Nitish Rana brought some stability with a 90-run stand. Skipper Shorey, in particular, batted beautifully (91, 109b, 7×4, 2×6), with his standout shots being two maximums off Axar Patel over long-off and fine-leg late in the innings.

But his dismissal in the 38th over — caught at short fine-leg — denied Delhi the finishing kick that was required and it duly fell apart.

India vs. New Zealand | Ishant can deliver even in his sleep!

All he needs now is a night’s sleep. “A good sleep is the best way to recover,” he said amidst laughter! Ishant hasn’t slept since he landed in New Zealand, apart from a couple of hours here and there. He’s jet-lagged and sleep-deprived, had not played for weeks, had battled a grade III tear in […]

CSK and RCB get down to brass tacks

The start of the 12th edition of the IPL couldn’t have asked for a bigger setting than Chennai Super Kings versus Royal Challenger Bangalore, thanks to their captains M.S. Dhoni and Virat Kohli. However, on history, the rivalry does not hold the same value as the home team holds an overwhelming edge when it comes […]

As an ad hoc arrangement, the BCCI’s Committee of Administrators (CoA) has obtained consent from Justice D.K. Jain (Retd.) to carry out the work of the Ethics Officer. Justice Jain — a Supreme Court judge from 2006 to 2013 — was last month appointed as the BCCI Ombudsman by the apex court. The CoA on […]